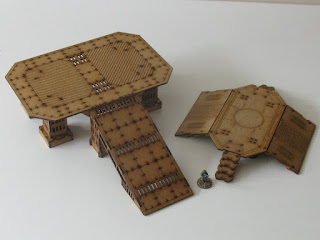 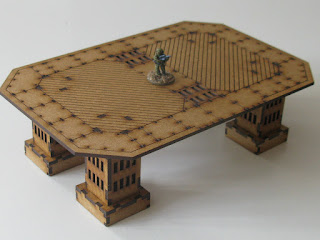 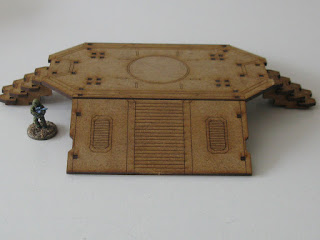 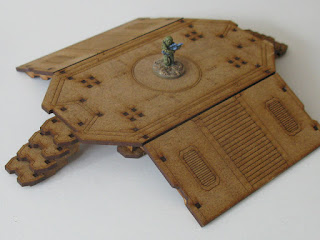 You can’t really have a proper sci-fi campaign without some sort of ‚get to da chopper‘ scenario objective or a dropship combat insertion of some sort. Not having a dropship, or even a chopper for that matter, I do now have two landing pads to either extract my forces from imminent overrun or to drop them from low orbit into the assault.
The bigger of the two is from the new sci-fi range by Warbases and should do for any heavy lifting, or dropping off, whilst the smaller and slightly more futuristic one is from Blotz. I particularly like the smaller one as I think it’s a better design and really looks futuristic rather than the more industrial Warhamster 40K look of the Warbases one.
They didn’t take more than ten to fifteen minutes to glue together and are very well designed, so particularly easy to construct. I did use up a whole can of Humbrol Sea Grey spray paint on the two, however, as the 2mm laser cut mdf doesn’t half soak it up at a rate.

I’ll do a bit of drybrushing and detailing when I get the time, with some masked up hazard warning stripes if I’m brave enough. Ideally, I’d base them on an irregular mdf template of some sort but I don’t have any to hand that are big enough, so they’ll have to be free standing in the meantime.

You can find them on the Warbases and Blotz webshop thingy: