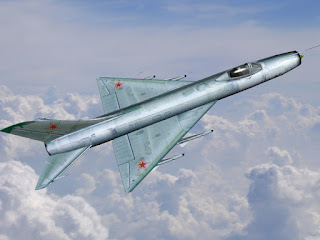 I have been thinking of quickly basing and painting a handful of Russian Cold War aircraft in 1/600th scale, just as something to do over a wet weekend. These would be based using the simple wire and mdf hex method that I have used on my Flashpoint:Taiwan and Flashpoint:Baltic models (which reminds me that I should paint the latter up too at some point), so no tiddly magnets to drive me nuts!
Anyway, I have a small selection of Tumbling Dice Su-9/11’s and Su-7’s left over from a Soviet bargain pack, together with the ubiquitous MiG-21’s, so I have no need to buy anything just for this and can get cracking as and when the opportunity arises. I really like the Sukhoi’s with their bare metal finish, raised canopies and delta wings, which really capture that late ’60’s Cold War vibe.
I can use them against my PLAAF Chinese fighters and fighter bombers too for a Flashpoint: Xinjiang 1969 Sino-Soviet ‚what if?‘ clash…how cool is that?