28mm Panzers in the Desert 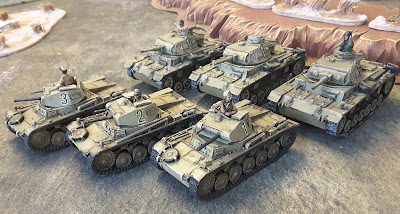 Up until now my WW2 Desert collection has been confined to the forces of Britain and her Empire, along with lots of Italians. The Blitzkrieg Miniatures offers last year persuaded me to invest in some Afrika Korps vehicles, after all who can resist a half price tank ! 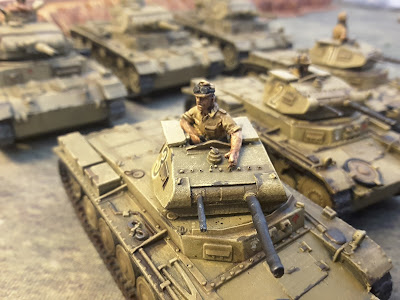 The first completed vehicles are 3 Panzer II and 3 Panzer IIIs. Our games are limited to pre 1942 so there is none of that fancy long barrel goings on, this is proper early war stuff. The crew figures are from Perrys. 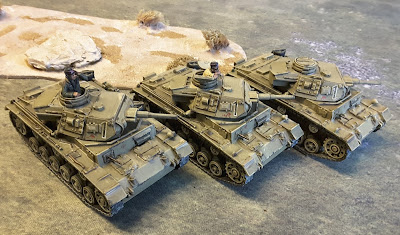 Early Panzers arrived in the area in either their dark grey, European colours at which point they were covered in local muck or they were painted in the darker green brown RAL 8000 Grünbraun rather than the more familiar later RAL 7028 Dunkelgelb. 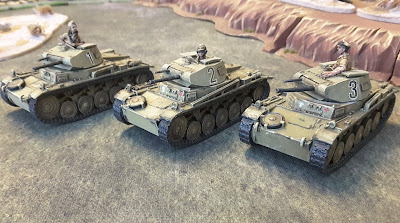 I used a RAL 8000 paint from a Company called Mission Models, who I haven’t heard or used before. I didn’t realise until I started painting that it was a airbrush paint so I had to dig a back of the cupboard and blow the dust of my airbrush.

Is it just me or are Airbrushes just a massive pain, all that mucking about between colours, does my head in ! 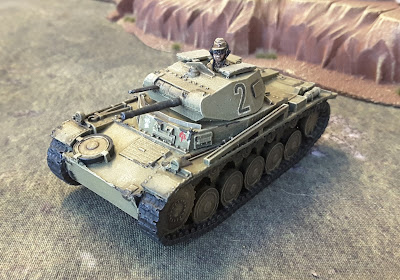 Anyway, once I got the bloody thing working, doing the base colour was relatively painless. I then used Green Ochre and Dark Sand to bring out the highlights before painting in the metal work.

I don’t normally bother with weathering, but as I am usually spending hours hand painting Caunter Camouflage onto vehicles I felt like a bit more time could be justified with these, so you will notice, if you look closely a bit of chipping and some washes going on. 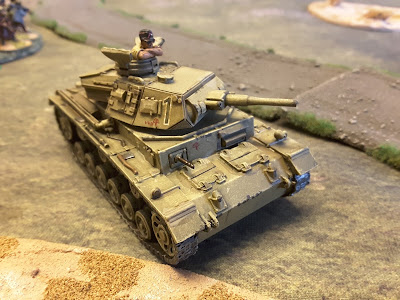 I also tried out AK Interactive Africa Dust Effects on the Panzer IIIs. If you look closely on the photo above you can see the sand deposits by the front hatches. The „paint“ is enamel based and is basically a clear medium in which small sand particles are suspended. Once applied in the locations on the model that sand might accumulate, it is left to dry slightly before using a clean brush and thinners to blend the effect.

It gives an interesting finish and I will certainly do more experimenting with it. 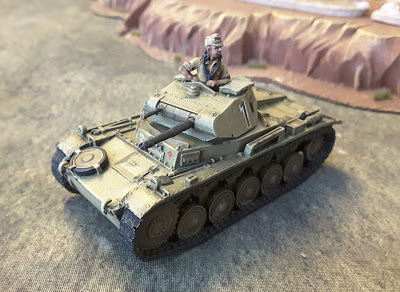 The tanks are for the 15th Pz Div who used a single digit numbering system in the Desert, so decal wise I have used the ones supplied by Warlord, adding divisional symbols by hand. 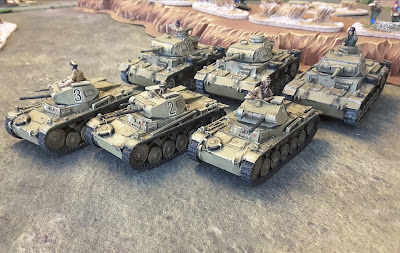 I decided when Blitzkrieg Miniatures did their Black Friday sale to up the Panzers to a full battalion which will be a HQ of 1 x 3 and 1 x 2. 2 Companies of 3 x 3 and 1 x 2 with a final company of 2 x 4 and 1 x 2. Unfortunately I am still waiting for the vehicles to arrive.