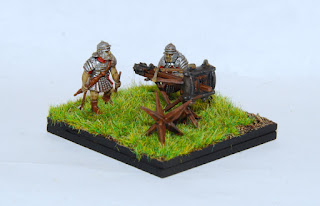 Hey all!
Well, I finished up some more Romans for the son’s collection (he has some on the workbench.) 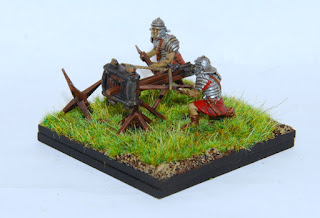 This was a scorpion, from Warlord Games Hail Caesar line.  I made the base out of two bases, and then used a drill to drill out the holes for the bases. 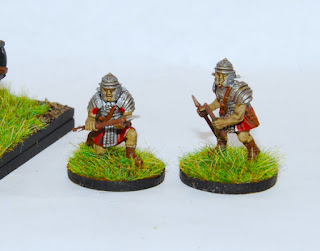 Here are the two guys.  You might notice that I am using a slightly different flock mix… when I got my lockbox, I decided to start to step up my flock game.  I’ve gotten a whole selection of flocks, and accident mixed a few, and I like how it looks!  I think I’ll probably do up a whole tub of a 28mm mix, with several longer grasses of several colors mixed in, to give it a bit of a more wild look, which is generally how battlefields should look!

Here is the scorpion in front of some Roman officers… I’ll see if I can get some larger group shots, as the collection is coming together a bit.

Who ever would have guessed we’d have a Roman and Germanic collection in the House of War?  Not I!:)