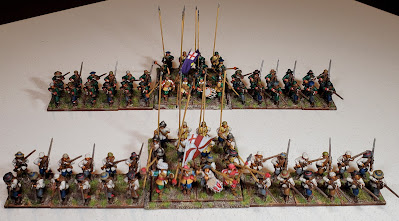 These two are the last of the figures I repainted from a recent acquisition from a buddy. Again, mostly the clothing (coats and breeches), as well as touching up other areas. The white coats are supposed to be Sir Thomas Tyldesley’s Regiment of Foote. Some historical sources say the coats were probably red, but I went with the white which is used by the reenactment group of this unit. I also painted the red gyronny crosses over a mostly white flag for this unit. This flag is also used by the group – however, a green flag was captured at Marston Moor which is believed to belong to this regiment. I just like the look of the flag and it contrasts nicely with the white coats. The green coats are supposed to be the Earl of Manchester’s Regiment of Foote. The reenactment group of this unit now wears red coats, although they used to wear green ones. There are historical records showing the earl ordering green coats lined red and also red coats lined green.

Both of these units fought at Marston Moor – Sir Thomas being under the command of Prince Rupert. Tyldesley’s ensign and drummer are Perry metals. Tyldesley’s sergeant with the halberd and Manchester’s ensign are both metal figures that came with the Covenanters set with plastic headgear. 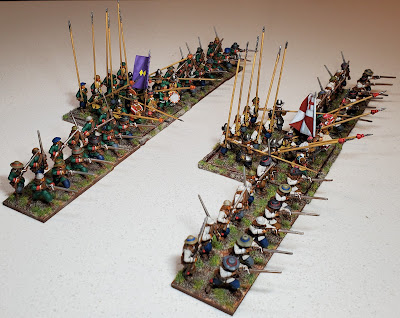 Looking at some period artwork of pike and shot formations shows the musketeers in more of a block. I don’t think I’ll rebase them, but I’ve seen some other folks basing them in three ranks which look pretty nice. 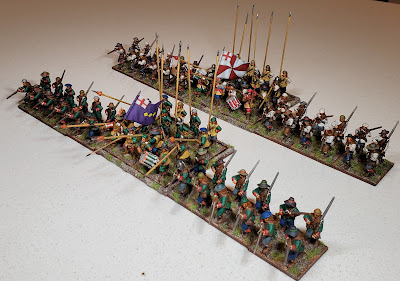 I have one more foot regiment to paint up – a box of Scots Covenanters that was included as a „freebie“ in a recent Warlord Games order. I’m waiting on some Perry pike and command figures to add to this unit. Once done, I’ll start on the cavalry – some repaints and also new ones. Thanks for stopping by and checking out the blog – and wishing you all the best!