A little Marvel game I made

Well, my son and daughter got a HUGE collection of Marvel Lego minifigures. So, like anyone would, I decided to make a game for them!

I based it loosely on my most playable game ever, my M.U.S.C.L.E. wrestling game.  But there was a lot different that needed to be reflected with this one… different powers, multiple characters in a fight, and a bunch more!

So I currently have it in a state that is pretty playable.

You play 3 v 3.  You have cards that you can play… Attack Cards, and Defense Cards.

There are two general classes of cards; a set of general „all“ fighting cards… punches, kicks, blocks… that each player gets, and then you also get four „hero“ cards that are specific to each hero.

The „hero“ cards are where I tried to grab the „flavor“ of each guy.  Gamorra is a bunch of punishing close combat attacks.  Spider-Man has several cards („Spider Sense!“) that allow him to avoid attacks, and one („Web up!“) that lets him freeze an enemy in place.  Dr. Strange can use the „Time Stone!“ card to heal hurt allies.  Iron Man can use his „Reactive Armor!“ card to absorb damage and strike back at whomever attacked him. Hulk can grab a piece of scenery and throw it at someone.  Captain America can toss his shield to attack, and use it to defend himself and even nearby allies, if they need it.

Each turn you get two „all“ cards and two „hero“ cards to use.  You can use any card to move one space, or use it for what it is meant for… hitting them with War Machine’s gatling gun or sniping them with Winter Soldier or leaping to attack several enemies with Black Panther.

There are a lot of variables to account for, on top of just the damage of the attack or the range.  Some characters have a lot of longer ranged „hero“ cards, some have a lot of close range „hero“ cards.  Some, like Hela, are nearly pure attack „hero“ cards.  Some, like Groot, are nearly pure defense „hero“ cards.  Some heroes, like Peter Quill or Captain America, focus on improving the team around them.  Some heroes, like Loki and Vision and Dr. Strange, can do crazy stuff, like using a Sling Ring to push an enemy far away or using the „Will you EVER not fall for that?“ card to force an attack to rebound on the attacker.  And then Ultron actually gets into the game with a bunch of drones (he gets 4 drone teammates instead of the usual 2) and can actually use his drone cards across the entire team,  even using them himself, to create a tough opponent who can sacrifice drones to save himself and can order his minions to swarm their opponents.

You need to keep in mind who is on your team and what they do, and also how badly hurt they are, as you play. 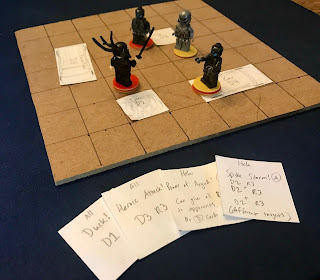 Here you can see Hela facing off with Ultron and two drones.  Her „Spike Storm“ card will be able to hit all three of her enemies, and her „Power of Asgard!“ card can push her own damage onto her enemies… she is all about damage, and has no defense „hero“ cards. 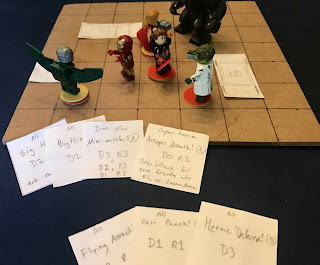 Here the three key Avengers face off with Vulture, Lizardman, and Rhino.  Iron Man’s „Mini Missiles“ are a fantastically versatile card, allowing him to push a ton of damage onto a single enemy or split it among several enemies (unlike Hela’s „Spike Storm“ above, which has to be split among enemies), while Captain America’s „Avengers Assemble!“ card actually lets the entire team pull an extra „all“ card… resulting in the three cards at the bottom of the photo and which gives the team a TON of options, either to attack, defend, or move, this turn. 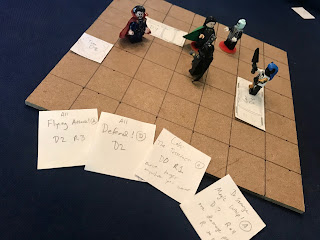 Here the Black Order might be in a bit of trouble, as Loki can use „The Tesseract!“ to teleport Corvious Glave to the far side of the board, and then Dr. Strange can use his „Magic Whip!“ card to crush him for one damage for each square he is away… one of the nastier combos in the game, if you can pull it off! 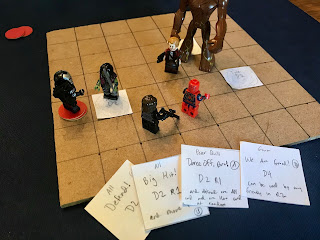 The Guardians can be tricky!  Here you can see Peter Quill, who can use his „Dance Off, Bro!“ card to take cards out of the other player’s hand, and Groot, who can use his „We Are Groot!“ defensive card to lend defense to any ally within range.  By the way, all three of Groot’s other cards are called „I am Groot!“ but they all do different things, and when Groot dies he gets replaced with Baby Groot, who can only take a tiny bit of damage and has no „hero“ cards, but he CAN move around using „general“ cards and being a pain in the rear end!  Rocket’s four cards include „Big Gun!“ „Bigger Gun!“ and „Biggest Gun!“… Rocket has no defensive hero cards.
So that’s the basics of game!  If you stand on terrain, you can use it to absorb a certain amount of damage before it disappears… trees absorb 2, cars absorb 4.  And as heroes take damage, they have to permanently discard hero cards that they use, until they are completely out and removed from the game.  The more hurt they are, the less effective they are.
So far it has worked really well…  my son and I just had a game as Hela, Loki, and Thor took on Ultron and his drones… I swarmed him with drones, using Ultron’s cards to keep them going and push them forward, taking Loki down.  But eventually Hela’s insane offense, combined with Thor’s ability to punish from afar with his „Hammer Throw! (the drones like to fight up close and don’t do as well from far away) wore me down and won the game for him!
Fun!  And if you want to know more, just ask!