7. Juli 2017Blogs INTComments: 0
I often have a few odd figures in progress on the bench. I’ll poke away at them while waiting for the main project to be ready for the next step. But it’s a good way to chip at the lead pile and do odd characters that you can’t assembly line paint like a regiment of troops.

This 15mm Russian FOO team was put together from some of the extra bits that the Padre sent me. 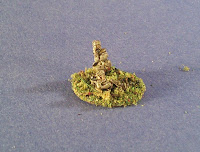 I’ve been slowly putting paint to these Foundry medieval civilians and the Perry WotR gun and crew for some time now in between ancient Rome, Middle Earth and WW2. The gun I got two Hotleads ago. The villagers have been in the lead pile for at least a decade. 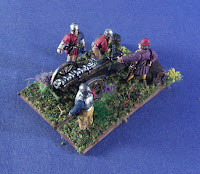 Finishing them has been waiting on the arrival of my order of very nice flower tufts from Shadows Edge.

They are about twice the price of the Army Painter tufts I’ve been using, but you get at least twice as much in the package and there is more variety of flower colours available. Plus they offer a variety of stem colours and stem heights. 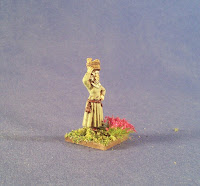 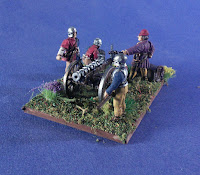 This was so much fun I dug out my other medieval civilians and gave them flowers too.

The big thing on the bench these past several weeks  (months?) has been another cohort of Late Roman auxiliaries for my friend. I’ve been neglecting the project recently and thought I’d better get a move on. The shields are using Little Big Man transfers.

As a hint to what else has been occupying my hobby mind lately, I’ll leave you with this:

Of which, more anon.