A quick look at Mantic’s „The Walking Dead“ game 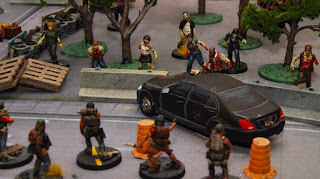 Walkers coming out of the woods!
Hey all!

Well, as I mentioned I recently picked up Mantic Games‘ „The Walking Dead“… I had been looking at the big boxed set for a while, loving all of the stuff inside it, and after a quick job helping someone with their college essays, I had the cash! 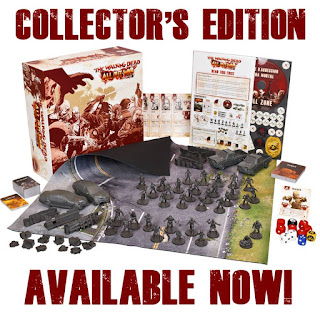 This is the Collectors Edition… a great deal!

So I’ve played a few games, and I have to say… what (simple) fun!  I thought I’d post a bit about it, for those who are interested.

So the game is pretty simple.  You can play solo, with one group of survivors, or against another person, with two groups (one each).  The objective of the simple game is to collect supply counters, which can represent all sorts of things, such as weapons, medical supplies, or even a surprise attack! 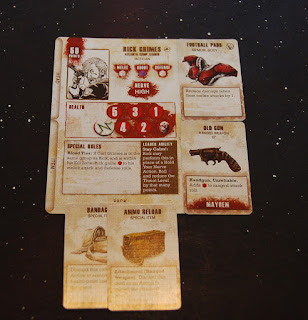 Here is Rick… he has white dice for his defence and attack, which is strong, and a good amount of health.  Survivors can also carry something in each hand, wear something on their body and head, and keep a variable amount of stuff in their backpack… some carry more than others.  Note he also has some special abilities.

Survivors are pretty simple; they have three combat stats (melee, shoot, and defence) as well as a Nerve rating that gets important later, when it comes to the Threat Counter.  Some also have some special abilities and the like, and you can give them equipment and upgrades, a la X-Wing.  They also have health, of course. 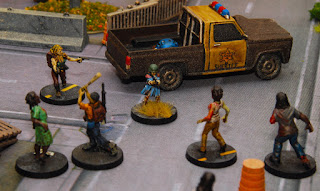 Survivors fight off some advancing zombies, in an attempt to search an abandoned truck.

Now, for the game:

Each turn is divided into four segments.

The first segment is the action phase; it’s when the players get stuff done.  Basically you go through each of your guys, and each guys gets to do one of several actions.  They are super simple and inutitive… for example move, stand up, swap item, shoot, search and so on.  The two most interesting actions are Hold Your Nerve and Make NOISE… I’ll explain those more later.  But each action is as simple as it sounds; stand up stands your guy up, move makes your guy move, and so on.

Terrain is simple; you can move around it, or move over it rolling a die.  That’s basically it for the players, and if you fight over a piece of terrain and choose to „defend“ instead of „attack“ you get a bonus die. 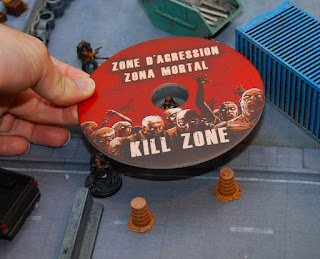 Rick got too close to this walker, who lunges in to fight!

The next segment is the event phase; this is the phase that moves the walkers and the game along.  First, you do a simple test; put a circular template above each walker, and if a survivor is close enough, the walker attacks!  This is one way the walkers move, but really it is limited to those walkers who are close.  One nice touch; when walkers hit obstacles, they stop.  The next time they move they can move around it, but it DOES create a nice feeling of walkers being a bit… well, dumb and straight forward. Then you draw an event card, one per turn.

The event cards help push the game along.  They can be all sorts of events… „Won’t Stay Down“ sees all the knocked over walkers get back up… „Roamers“ sees more of the walkers wander… „The Herd“ sees the zombies gather and move en masse… „Shooting at Shadows“ results in your firearms-armed guys with lower nerve blasting away randomly.  They also sometimes add one to the Thread Level of the game.

Now let’s take a quick break and talk about two important parts of the game; the Threat Level, and „Noise“ and „Mayhem.“ 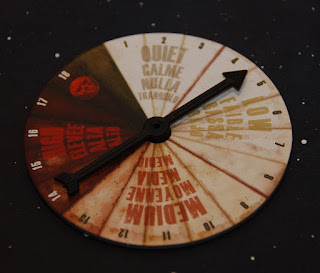 The Threat Counter… as it gets higher, things get more hectic, more dangerous, more deadly.  You’ve got to do what you can to manage the Threat Level… stay quiet when you can, and if you have to put something down do it as quickly and quietly as possible, because the post-apocolypic world is always getting worse.

First is the „Threat Counter.“  The Threat Counter is basically an 18-step tracker that keeps track of how hectic the world is getting.  There are four levels… All Quiet, Low Threat, Medium Threat, and High Threat.  The Threat Level can go up when you do certain things; for example, every time someone fights, the Threat Level goes up, and lots of Event Cards bump the Threat Level up as well.  This has two effects.  First, each event card does different things, depending on the threat level.  Take a look at the „Pandemonium“ and „Roamers“ cards below to see what I mean.  Second, if the threat level is higher than the „Nerve“ value of any of your survivors, that survivor will panic, and you have to roll a specialized die to see what they do that turn…they may run, might lose an action, might scream and cause Noise… there are several simple effects.) 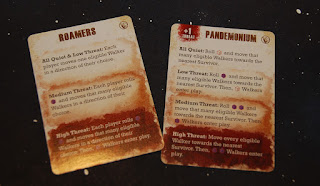 The more frantic and dangerous things are, the worse the event cards get… at High Threat level, things have basically fallen apart; good luck making it out alive!

One cool thing about the Threat Counter is that you CAN lower it.  One of the actions that players can take is „Hold Your Nerve.“  Basically, you roll a die and you might lower the Threat Level by one.  It’s a cool mechanic… if you slow your guys down and get quiet, you can actually bring the Threat Level down, representing your survivors getting quiet, laying low and letting things calm down.

But the Threat Level is important, and usually as the game goes on and your people do things the game gets more and more dangerous.

Second is „Noise“ and „Mayhem.“  You can cause these in only one or two ways… the most common way to cause noise is to Run (8 inch move) instead of Sneak (4 inch move.)  If you cause noise, it simply draws the nearest Walker closer.  This keeps the Walkers relatively quiet until you get too close or get too noisy.  „Mayhem“ is similar, except it A) draws ALL nearby walkers and B) increases the Threat Level by one immediately.  Not a lot increases Mayhem except certain weapons; mostly guns.  But it does make moving quickly and blasting away a bit dangerous, and feels correct. 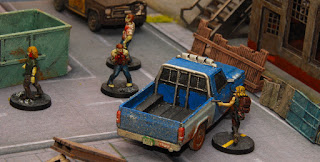 (You can also do an action called „Make Noise“ which is exactly what you’d expect, and it’s a neat mechanic which can allow one survivor to draw zombies away… very „Walking Dead“ feel!) 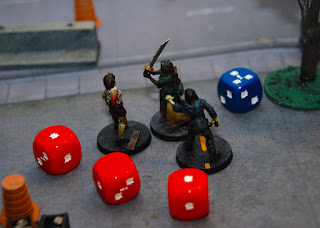 After the Events phase, you fight!  Melee is simple; dice vs dice.  Players can choose to attack (you cause damage if you win) or defend (you don’t cause damage if you win, but generally people have better defense scores than melee… keep the walker at bay until help arrives!)  Differential in roll is the damage you cause, if you chose to attack.  Zombies don’t have health or hit points; if you win and, in your roll somewhere on your specialized dice, you got a ! mark, you got a headshot, and the zombie dies.  If not, it just gets knocked over, and can get back up later.  Once you knock a zombie down, its best to jump into another combat with it, because if you win a fight against a knocked over zombie, you automatically get a headshot and kill it… so the melees see the zombies tricky to kill, but if you can you can bash them over and go in for the kill.  Again, very „The Walking Dead“ in feel.

Then there is the End Phase.  You roll for each knocked over walker (they can get back up) check to see if anyone who is Bitten loses a health (Bitten is the zombie equivalent of a headshot) and then on to the next turn! 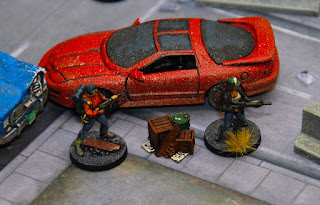 Cars always have supplies in them… here, two survivors find a supply marker… hope it’s something useful, and not a lurking zombie!

So that’s basically it!  Your survivors move around the board, trying to balance getting to supply markers with being too loud and making the Threat Level go up.  No matter what, though, it tends to go up, making the game more and more tense and dangerous as you go.  There are scenarios and such, of course. 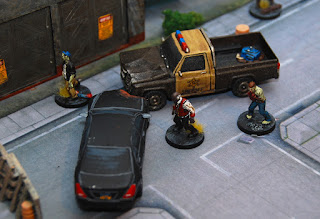 I must say, I love how simple the game is… it is one of the more simple games I can remember playing.  It is easy to remember the actions you use most often… move, fight, and search (used to „get a supply marker.)  The other stuff (get up, swap item, Hold Nerve, Make Noise) are used less often, but are simple enough.  The zombie control is simple; get too close and they attack… otherwise, just do whatever the single action card says to do.  Then fight, roll to see if lying down walkers get up, and go on to the next turn.

The one thing I’d like is a simple campaign, but I wrote up some simple rules for it already, so I’ll post them soon:)