A Stocking Full of Lard 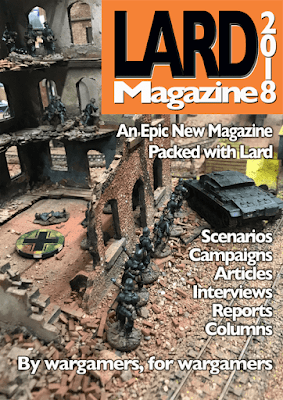 I was disappointed not to see the TFL Summer Special this year but it has now been replaced by an annual Lard Magazine, which has just been published instead of the Xmas Special. It’s an interesting idea but I will miss the bi-annual format, which coincides with my holidays.
I have contributed to several of the Specials in the past, with scenarios and articles for Bag the Hun, but haven’t been organised enough this year to get anything submitted. I have no excuse not to get my act together now that there’s a full twelve months to sort something out!
It’s a sad fact that I have drifted away from Too Fat Lardy based projects this year, apart from What a Tanker! and Bag the MiG. This was partly a response to the total domination of the TFL stable by Chain of Command and Sharp Practice.
I am genuinely  interested in both of these rules, particularly Chain of Command, but will probably never get round to using them due to my phobia of 28mm figure painting, not to mention my almost complete disinterest in Napoleonics. It’s horses for courses I suppose?
I’m sure they are brilliant rules but I’m more of a naval and air wargaming fan, so they will always be another one of those ‚if only I could find the time‘ daydream projects. I think there may well be something under the Xmas tree tomorrow to focus my mind, I’ll just have to wait and see?
The new magazine does have quite a lot of content dedicated to these juggernauts of wargaming but also has some other material for some of the ‚lesser‘ rules like Bag the Hun and I Ain’t Been Shot Mum, which is a breath of fresh air. I get the impression that there’s an effort underway to give these older rules systems a much needed boost?
There’s also some good stuff for What a Tanker but not the anti-tank gun rules that I was hoping for. The best article, from my point of view at least, is a revised spotting system for BTH which looks very interesting indeed. This uses a dartboard wheel thing which looks intriguing!
Anyway, for just under seven quid you can’t argue with the value for money, even if all of the content might not be you cup of tea.