A Warlord rules question about proximity.

19. Juli 2017Blogs INTComments: 0
This is a Warlord rules (Black Powder, Pike and Shotte) question. I have also posted it on the Warlords forum.
Red is the Russian unit (in red uniform). Blue is the Prussian unit in blue uniform. 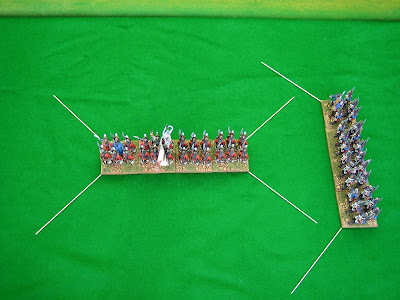 So the situation is this.

Blue is on the flank of A, having ordered a charge and come up short. Red is in blue’s front quarter. Red can only move into its front or rear quarters because it is in proximity. 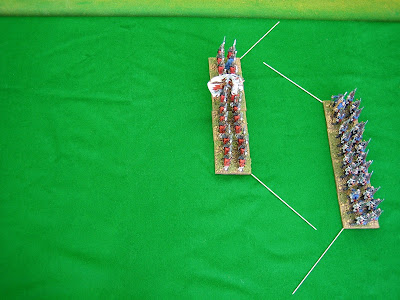 However, let us assume that red had been more adventurous. Let us also assume that red has godlike foresight and knows he will roll a double one for any command roll.The question is, rather than act on initiative, could red be given the order „turn to face blue and then, charge“ ?My question is aimed at what represents front and rear quarters under the proximity rule. Do the quarters that apply to the unit at the start of the turn apply to the unit for the whole turn (as per quarters for charge), or do front and rear quarters change with the moves carried out by the unit. If the former, the order is illegal; if the latter, the order is legal. BTW, I realise that red can never charge blue in the flank because it started the turn in blue’s front quarter.