An Italian Wars Weekend, in Scotland.

21. November 2017Blogs INTComments: 0
Last weekend, my turn to stage a game for The League of Gentleman Wargamers came about. I chose to do the Italian Wars as a single ‚Kingmaker style‘ campaign game.

The bulk of the figures were provided by Steve Rimmer and myself with significant contingents provided by Chris Henry, Angus Konstam, Dale Smith and other members of the group. It was a good job they were. On Sunday I estimated there were over 3,500 figures in play, fighting on every table.

The massed buildings, representing the 44 towns and cities, were brought by several players, with Peter Nicholson and Charles S. Grant providing most (I think); Steve Rimmer provided most of the walled cities. Before the game, not having enough real estate was my chief worry – I don’t know how players have the room to store all this stuff – Charles S., alone, brought over 40 buildings and Fort St. Elmo!

Even with the rugged hills rising as a backdrop behind the small town of Kirriemuir in Angus, an icy Saturday November morning in Scotland didn’t make it feel much like being in Rome, Florence or Venice (it was positively balmy 15C in Rome last Saturday). However, inside the hired hall it looked a little more like it.

Italy, from Naples to the Alps, was set up on five 6′ deep tables. The first three (looking north, as per the photograph above) were 12′ wide and represented the interlinking localities of Naples, Rome and Florence. These tables were all split by the the spine of the Apennines, all classed as impassable rugged mountains except at three passes. Being impassable they didn’t have to be as wide as they should be, allowing more space to manoeuvre troops on the ‚coastal plains‘. Naples is just out of shot in the lower left corner, the big church is Rome and the big city on the next table is Florence.

The next tables, looking north, are the table with (left to right) Genoa, Modena and Bologna which was 16′ wide, and the table with The French Alpine passes, Milan, Ferrara, and Venice which was 20′ wide. These tables were split by the river Po which was, by the nature of the gap, remarkably straight edged but worked quite well.

All in all,less the space taken by the mountains, that gave a remarkable 432 square feet of potential battlefield for the 14 players to wade about in.

The players were (and I’ll only name each once): 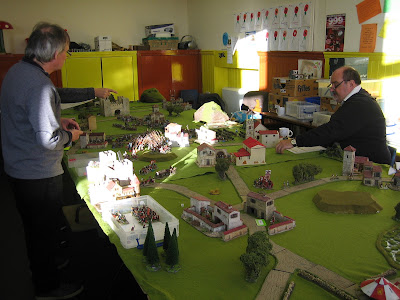 Steve Rimmer (Milan) on the left and Angus Konstam (Doge of Venice) on the right.

The walls of Milan are in the distance and the place in the sunlight is Ferrara (actually sited on the wrong side of the Po for game play purposes).

Venice pictured later was represented by fort St. Elmo and is just out of shot behind the tank – which we made up rules for and featured as part of a Venetian naval invasion of Southern Italy. 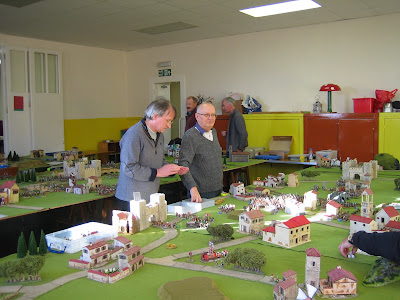 In the mid-blue collar, Bill Gilchrist (King of France). 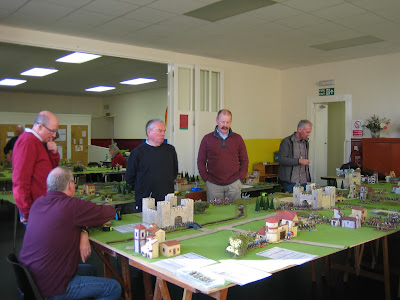 The three walled cities, left to right are Bologna, Modena and Genoa. 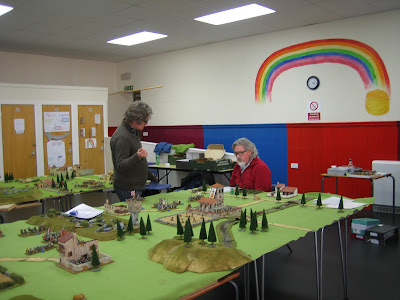 On the left, Chris Henry (Spain’s representative of the King, The Grand Captain) asks Peter Nicholson (The Pope) to leave him alone and the Pope will have none of it. Spain and the Papal State will battle it out for the entire weekend and Spain will get clobbered, having only one city (Naples) and two units between its two players. 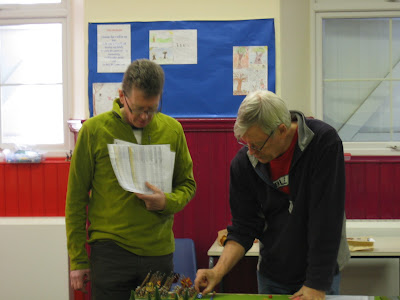 On the left Peter McCarrol (France’s No2) who starts the game in the Papal State east of the Apennines fights it out with Colin Jacks (Spain’s No2). 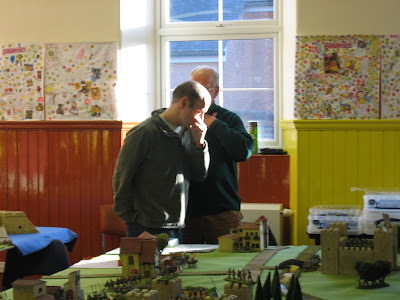 Chalie Grant (The Papal State’s No2) longs for another duplicity card. 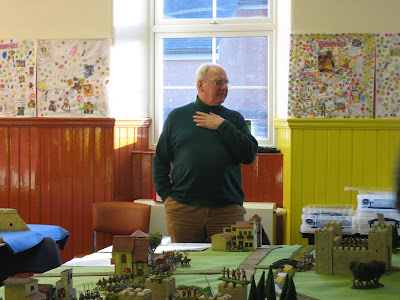 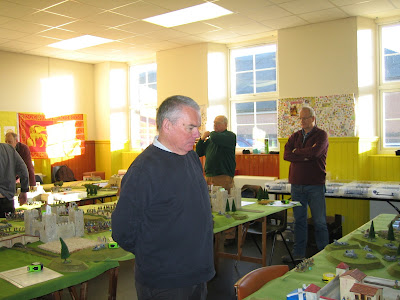 On the right, in burgundy, Peter Jackson (The Duke of Bologna).

The format for the game was as follows. At the start of each session, each player declared their support for Hapsburg or Valois – because the rules were a U-go-I-go mechanic based on Warlord’s Pike and Shot – and this determined who was allied to whom for the session. In all, if memory serves, I think the whole game was divided into 6 playing sessions.

To this mix I added events cards that were either simply handed out to each player, or obtained by rolling a 5 or 6, at various points in the day. These cards included such things as pontoon trains to aid the crossing of rivers, duplicity cards that enabled players to change sides mid session, spies, the appearance of Savonarola, ambushes, blackmail, earthworks and various other things to stoke the pot. All cards could be played or traded at any time. All cards were always positive for the player who used them and generally bad for everyone else.

The victory conditions were simple. By building a fiefdom by capturing towns for themselves, the players could levy taxes in ‚gold‘ (poker chips). Gold could be used for various things (including buying new troops) and the player with most at the end of the weekend would be declared the winner.

Here are some shots taken of the action and more can be found on Bill Gilchrist’s blog here. 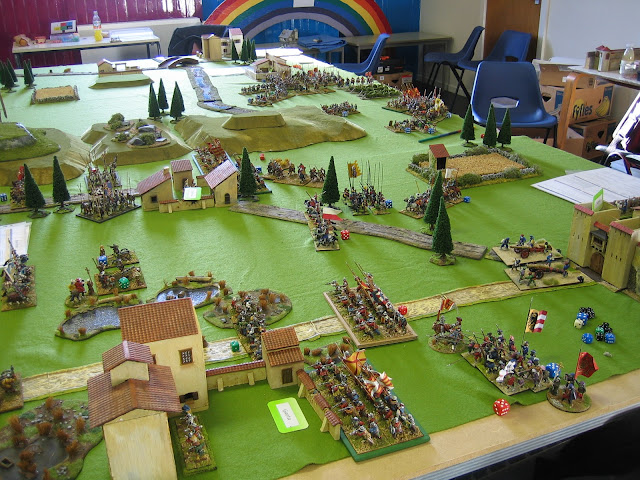 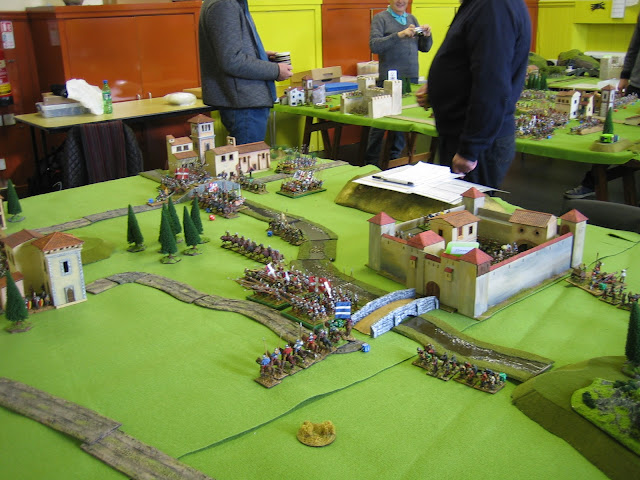 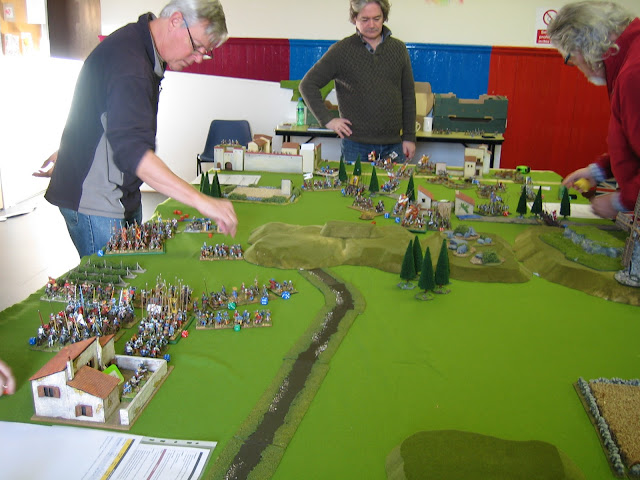 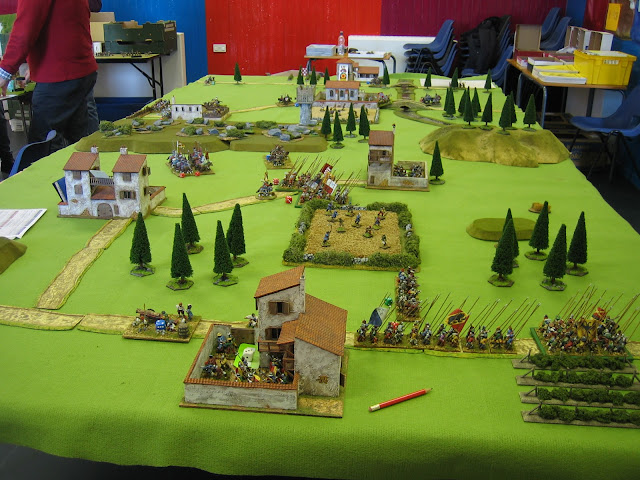 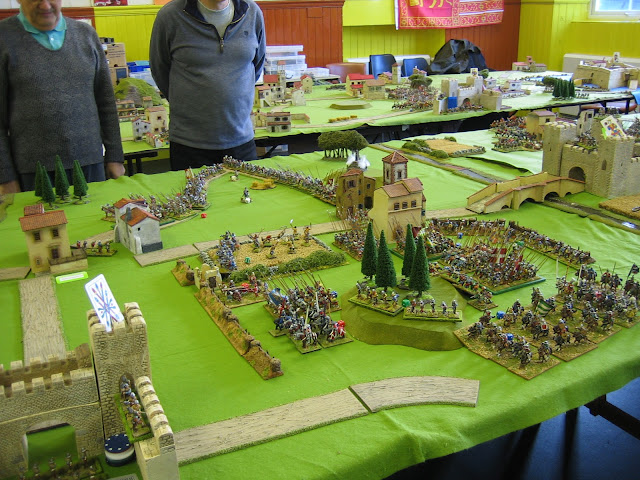 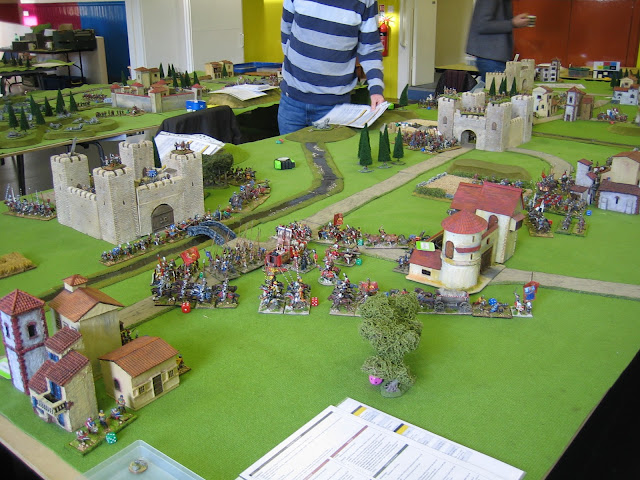 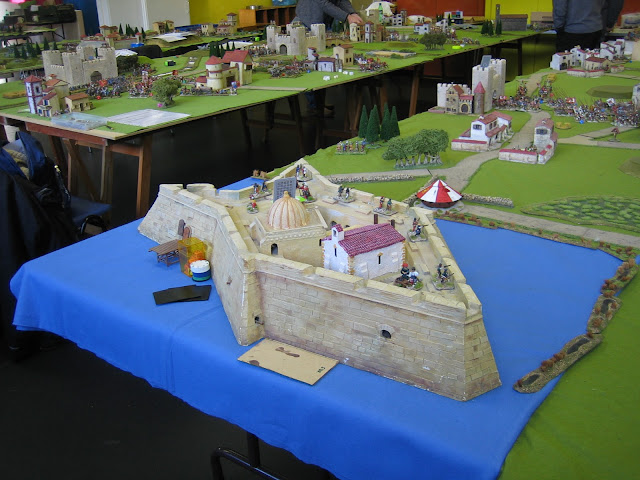 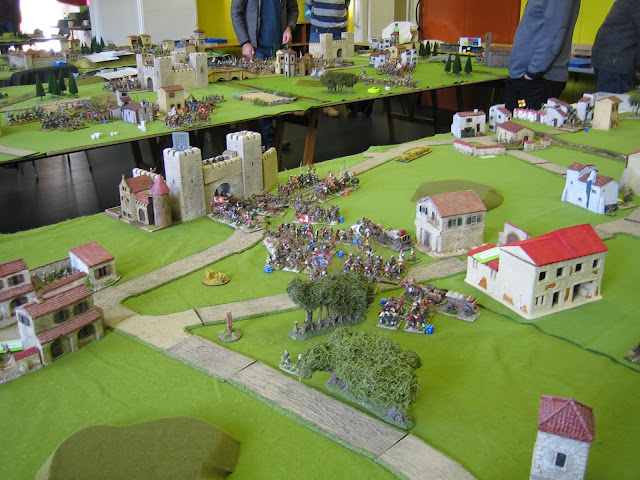 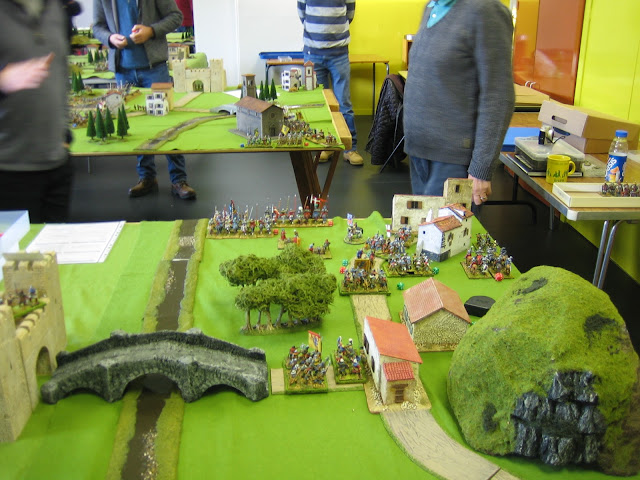 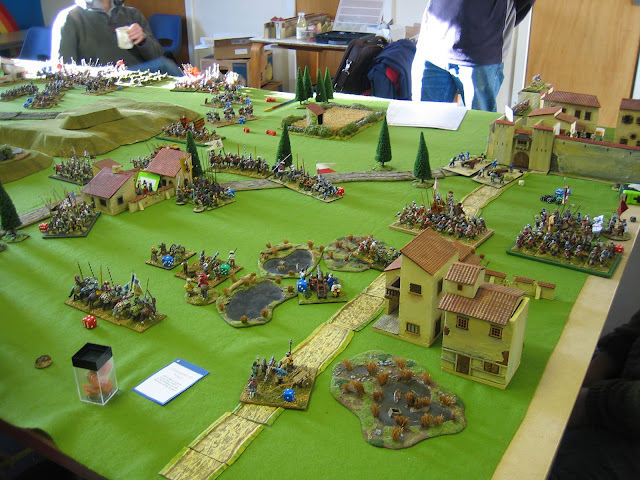 I’d like to thank everyone who contributed to the game and I hope everyone enjoyed their weekend.

I can relax now, for a year or two. Scheduled LOGW games for the next couple of years will be organised by others. The next one, in the Spring, will be themed as A Very British Civil War weekend.