5. August 2017Blogs INTComments: 0
The Haiti prep continues with the first batch of troops currently sitting on the side whilst the filler dries before the bases are given a liberal coating of sharp sand.
I thought I would clear a couple of items which have been hanging around since March and Hammerhead, the first items which need to be cleared off the paint table is an Engineering section for Egypt. 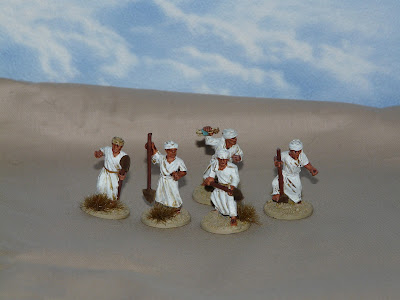 Within Sharp Practice the support option is made up of an Engineer Group with Cart it should be made up of six men and a Status I leader, I have five painted up from foundry but pretty sure I have a spare Arab knocking about, and a donkey or camel might be more suited to the desert than a cart. 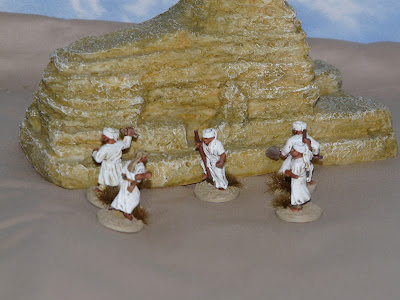 When in a defending force an Engineer Group may always have 8” of prepared Breastworks or 12” of Barricade blocking a road or similar good news as I painted some of these recently but they have yet to grace the table yet.

Within SP Engineers who are given tasks to perform will generally complete those tasks faster, re‐rolling any 1’s rolled on the Task Roll however Engineers will not engage in firing nor will they attack an enemy. However, if attacked they fight as Aggressive troops in Fisticuffs.

A useful addition to the Egyptian project or any other Middle Eastern adventure.