21. Februar 2018Hersteller ENComments: 0
The snow of winter is in Scotland but its mainly gone now and a weak sun shines! The eighth in a series of linked Flintloque articles by Andy Jefcoate about his forays in the Witchlands and in Flintloque. If you want to catch up on the first to seventh articles where he got his starter set and then tried it out followed by a nail biter of a scenario and then get his Pug Dogs marching plus more Cavalry and more then you can read them on our blog HERE and work backwards. In this article he gives legs to a marshal of the Ferach Empire! With pictures of his own painted collection. Read on and enjoy. GBS 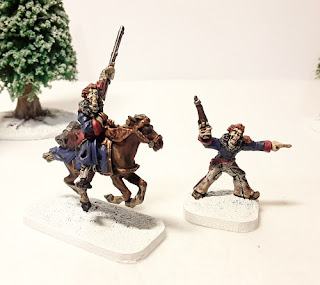 Converting and Painting Marshal Ney
Alternative Armies do an excellent range of named special characters for all races that can be used in Flintloque and Slaughterloo. Game statistics and back stories are provided for them all so you just need to paint them and they are ready to go. I’ve bought several of them for the Witchlands and I plan to build them into my narrative over the coming weeks. You may have noticed the picture of Scooby Doom and Raggy that snuck in with my cavalry article in December. He gets in everywhere that Scooby Doom! While Saindoux has been a great commander for my Ferach forces up until now I also wanted a named character that I could use in Flintloque but who could command my Ferach army for Slaughterloo in the future. After much deliberation I decided on Marshal Galahad Ney. I like the dynamic figure on the galloping horse but also the stories around him made him stand out for me. This figure is limited to 1000 castings and I purchased number 810. 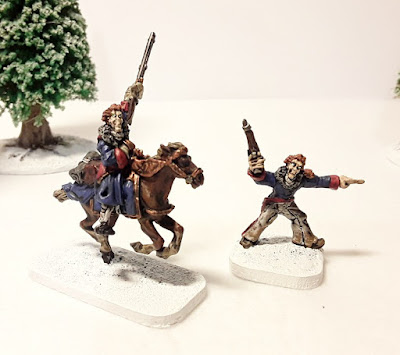 Background
Known as the ‚bravest of the brave‘ Marshal Ney led the 1st Armee du Norde on it’s retreat from Moskova and if it hadn’t been for him the whole army would have been lost. He appeared seemingly everywhere at once, driving the army on and being where he was needed most. He is perfect for small scale scenarios with a small bodyguard or commanding an army in a full scale battle.

In Flintloque he is a Ferach Elf / Legendary / Regular / Elite armed with a Sword and High Elf Musket mounted on a light horse. All troops in his section gain a +2 Discipline Modifier as long as Ney is alive and in line of sight. He never personally takes a morale test for any reason and he has 4 Wounds on his profile. He is therefore very useful! In Slaughterloo he can be used as either a C-in-C or a General but that’s something for the future. 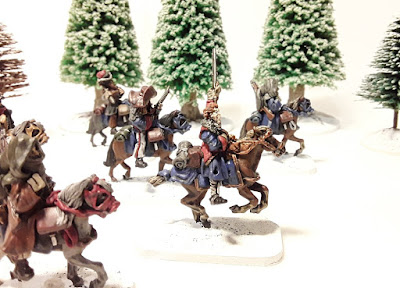 Marshal Ney on foot
While Marshal Ney is good as a mounted character there is always the chance of him ending up on foot during a game, or simply a scenario where a character on foot is needed. There are foot and mounted versions of some characters in the Flintloque and Slaughterloo ranges but Marshal Ney is only currently available as a mounted character as he was meant for Slaughterloo. Do not fear though, in this situation the kind people at Alternative Armies will supply a torso and head of the mounted character plus a foot figure to use for conversion upon request. With Marshal Ney the figure that they supplied on foot was the pointing command figure from pack 51041 2eme Regt de Ligne command, which is a nice dynamic pose. I did the conversion with some clippers and a sharp modelling knife. While I’m sure that some of you out there have a better range of tools for this sort of thing it didn’t take very long to do. As you can see from the end result I kept the fur collar of the mounted figure which creates a larger area to join to the foot figure and helps to tie the foot and mounted versions together. The pointing command figure from pack 51041 also has long hair so the fur collar helps to hide where this was removed from the casting as Marshal Ney’s hair is short. If you want to try a conversion I recommend that you make the area where the head and torso join as flat as possible to insure good adhesion and limit the need for filler to hide any gaps. I wanted a figure that looked like he was leading from the front and exhorting the troops around him to follow. I was happy with the result and I hope you like it too. 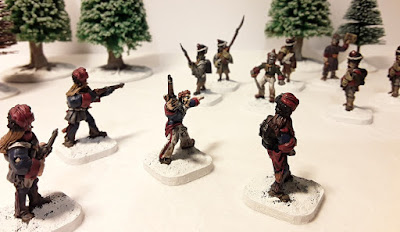 Painting Marshal Ney
As I wanted him to be my overall commander I decided to paint Marshal Ney using the Ferach uniform colours of mid blue, red and white. While the great coat on the mounted figure could have been grey as on the lovely painted example of this figure on the Alternative Armies site, I decided to paint it blue with red facings. This then matches the jacket on the foot figure and ties them further together. As I said earlier I left the fur collar on the converted figure which adds an individual touch to this characters uniform and is perfect for a figure in the severe cold of the Witchlands. I painted the fur grey to represent wolf fur.   Perhaps he likes the Corps Imperial des Dragon? To make him stand out further from other Elves I gave Ney ginger hair (as a nod to the historical figure) and green eyes. When painting the horse I tried to use more gold than usual so that it is fitting as the mount of a Ferach Marshal, but there is also various equipment attached which fits with the retreating army scenario. In normal conditions, a Marshal would never be expected to carry such things! 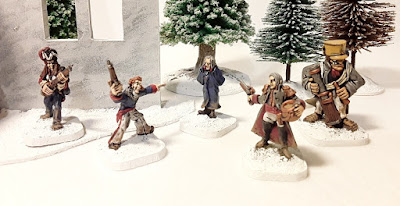 The continuing narrative
As Saindoux’s force has grown it has come to the attention of Marshal Ney as he works hard to hold the rearguard together and fight off the Dark Czar’s forces. He therefore appears from time to time to ask Saindoux to send part of his force on special tasks, some of them led by Ney himself. Sometimes he appears with a small bodyguard and sometimes alone having sent his bodyguard off on another task once he has reached Saindoux. 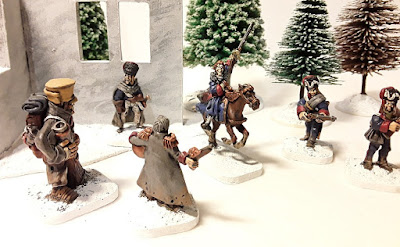 What’s next
My Flintloque forces have grown fairly large but while I have infantry and cavalry, I have yet to add any artillery which is vital if I want to move on to playing Slaughterloo at some point. Which I do. I have therefore ordered the 5027 Grapeshotte Expansion book and a Ferach Elf artillery piece with limber and crew. I’ll let you know how I get on with these in my next article.
Thank you for reading.
Andy