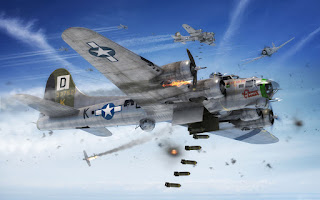 I’ve booked in a Bag the Hun multiplayer game for the 21st November at the club, which will be built around an early 1945 bomber mission over Germany by B17G’s, escorted by P51D Mustangs and/or P47D Thunderbolts, with a couple of P38J Lightning twin engine fighters as an added extra.

The Luftwaffe will be attempting to break up the combat box using waves of FW190A8’s and FW190D9’s, Bf109K’s and Me262’s, although some Me163 Komet rocket powered interceptors may also make an appearance if I get them painted up in time.

So far, take up has been a bit slow but I’m sure it will pick up once the players get the message. I’m looking forward to working up both the scenario and the cards for this one, as there are a few rules that I have yet to try out involved, so it will be an interesting little project for the half term break.