18. Dezember 2018Blogs INTComments: 0
I’ve been rooting around for an historical operation on which to base the Bag the Hun anti-shipping strike scenario and have come up with two possible options, based on the Operational Record Books of both No.263 (Whirlwind) and No.129 (Spitfire) Squadrons. In both instances, which took place in April 1943, no actual attacks on S-Boats happened but they could easily have done so and would be entirely feasible, based on similar anti-shipping missions c1941-43.
The first option is a Roadstead (anti-shipping) operation on the 4th April, involving six Whirlwinds and a full squadron of Spitfire V’s, although I would scale back the latter to two flights of four aircraft:

This would be a far larger game than I originally planned, with up to four players on the RAF side and a similar number for the Luftwaffe and Kriegsmarine, so it’s a bit too big for what I am intending. It would make a splendid multiplayer game, however, so I might draft it out anyway. It does have the advantage that I know some of the Spitfire pilots identities but I’d also have to sort out a couple more ‚Whirli-bombers‘ to make up the numbers. 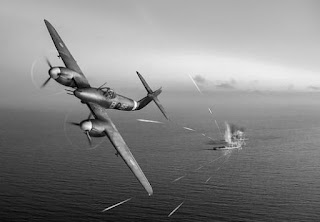 The second option is a smaller Armed Ship Reconnaissance mission on the 14th April by a flight of three Whirlwinds, escorted by a single flight of Spitfire V’s. This is far more manageable and would be ideal for a two or three aside game, without any slowing down due to an excessive number of cards. It also requires no additional aircraft to be based and painted, in addition to the ones I’ve already mounted on flight stands and undercoated, and I would avoid any fiddly bombing.

Ideally, I’d like to find Form 541 entries for No.129 Squadron rather than just the ORB’s, as they’d give me the names of the Spitfire pilots involved, as well as additional details to work on. However, I’ve got enough to make a start, assuming I can find some pilots to fill out the III/JG2 ranks, as they will otherwise remain anonymous. The Kreigsmarine 5th S-Boote flotilla numbers also need some sort of historical identification but I’m narrowing that down too, based on the various books that I have on the subject.
Tally Ho!