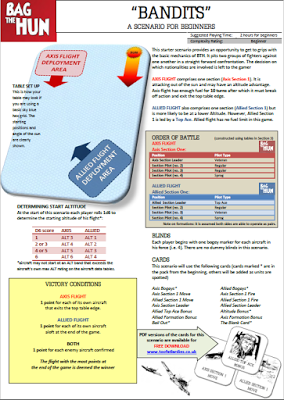 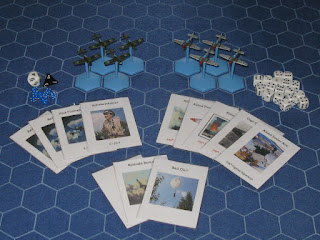 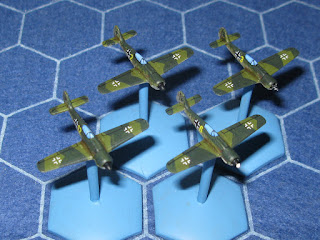 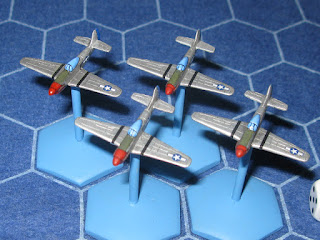 I have set up a follow on game from the Bag the Hun scenario that I played against number one son on Tuesday. This time we’ll be playing the Bandits beginner scenario from the Bag the Hun 2 rule book, with a schwarm of four Fw190A8’s of II/JG4 against a section of four P-51 Mustangs of the 336th Fighter Squadron, Eighth Air Force. This is a simple starter scenario, limited to ten turns and with only eight aircraft involved, so very suitable for the eleven year old to build his experience. I’ve played it several times before as well, so I’ll also have some idea of what I’m doing! 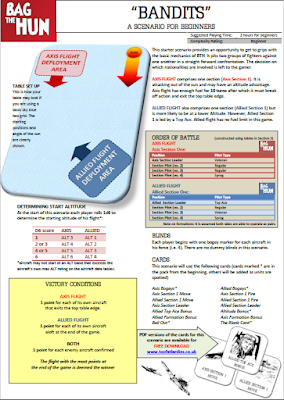 I decided to re-use a set of cards that I created for a series of late war games a few years ago, as it made a lot of sense to recycle some of the pack to cover the requirements of the scenario set up, rather than to make a whole load of new ones. I have made a couple of changes, leaving bogeys out again to keep it simple and swapping the Allied Top Ace for a Junior Ace, as that’s what I had in the pack already. Hopefully this time the sprog will get his well deserved comeuppance!