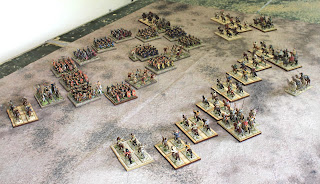 Battle of Carrhae 53 BC – Command and Colors Ancients Game

On Friday afternoon I played a solo Command and Colors Ancients game out in the shed. I’d just received my new Command & Colors Medieval mat with 11 x 13 five inch hexes from Deep Cut Studios, so I was quite keen to try it out in a game. The scenario was the Battle of Carrhae with Crassus taking on the Parthians under Surena.

The Romans deployed in a hollow square and had five command cards to the Parthians‘ six. I used the Parthian shot rule for light bow cavalry from the Command & Colors Medieval game but reduced it to one dice rather than two when evading. This turned out to be quite a hard fought and close game with the Romans giving a good account of themselves. In the end the Parthians won 7-5 victory points.