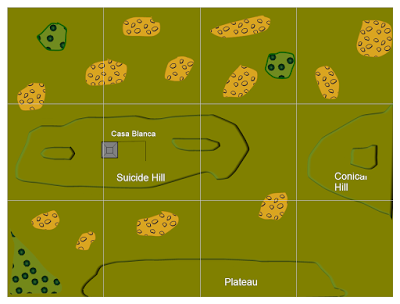 The plan with this game was to run it earlier in the year to mark the 80 th anniversary of the Battle, however our Naval Campaign and an outbreak of Ewok Fever put the gaming schedule back a few months.

In November 1936 Franco and his Nationalist Forces had tried and failed to take Madrid in a lighting advance and attack. In fact in 2016 we did part of that battle with a recreation of the attack on the University City, still one of my favourite games. You can see that Battle on the following link

Franco’s next big move against the Capital came in February the following year, using the experienced Moor and Legion troops who had followed him from Africa the grand plan was to break through the Republican Forces along the River Jarama and cut the communication between Madrid and the temporary Capital of the Republic, Valencia.

So our action concentrates on the small part of the Republican line which was held by the British Battalion, it makes for a good scenario because the forces are relatively small (for us) and the fighting was in a compact area, such that we only used 8 ft x 6 ft of our table. 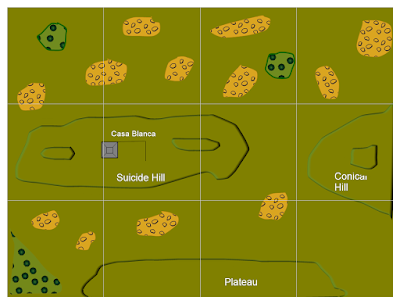 Above is our terrain map for the game, each square representing 2ft sq of table, the main features of the Battlefield are the three hills, the long undulating ridge, christened by the soldiers as „Suicide Hill“ containing the Casa Blanca building. Conical Hill on the right and a long Plateau behind those two features. 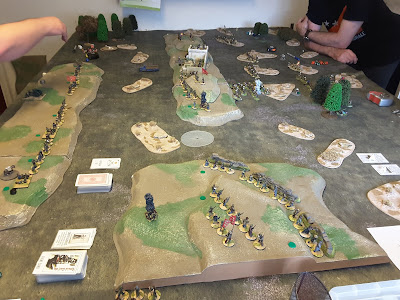 You can see the table set up above, there is a wooded area to the rear left of the Republican line, and random areas of scrub spread out across the playing surface.

A Word on Rules

The following scenario / notes are for our home brew rule set of rules which are a mix of Iron Ivans WW2 set, with a bit of toofatlardies card activation, event cards, ammunition rules (ammo was so often a factor in the SCW) and Spanish Currency to buy reinforcements.

There are no set reinforcements, each player rolls each turn for money which they use to buy new troops from a list.

Hopefully not to difficult to adapt to your own rule set. If it doesn’t compute just ask and I will try and provide more information.

I designed the game to last two of our „day“ gaming sessions. 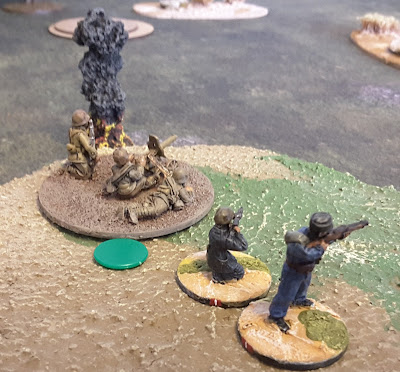 Your Mission is straight forward, stop the Nationalist Forces breaking through your lines.

Set Up as follows,

Each Coy is represented by a HQ section of 4 figures and 3 Sections of 8 figures each armed as the model (mostly old rifles, the odd Chauchat LMG etc).

Company 2 is augmented by 4 Maxim Mgs.

The Maxims have NO Ammo at the start of the game. When Ammo arrives at the gun roll 1d6 per ammo chit, 1 to 2 the Ammo is the wrong type ( it can be delivered elsewhere), 3 to 5 the Ammo is loose and needs to be hand fed into belts, 6 its good to go. Instead of firing a gun team can try and load a section of belt, roll a d6 for each chit, 5 or 6 and ready to fire.

However the British Battalion was very resilient over the battle and wounded troops returned to the fray on many occasions.

Put your losses in a separate area, at any time you may bring back half of your loss stash at a cost of 25 psts per 8 man section or 4 man HQ. The troops are classed as Coy 1 for stats, as above regardless of where they came from, they can only be bought in sections of 8 and are armed as the figs however you may not have more than 1 LMG per unit. The remaining troops in the loss area at that time are now lost permanently. 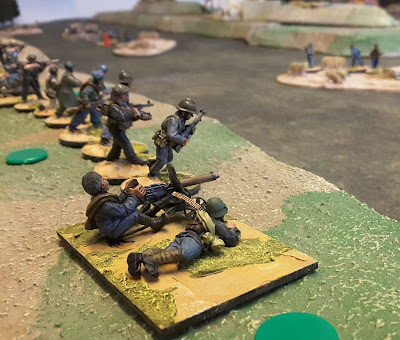 Your Mission is straight forward, break through the Republican Lines and drive on to Madrid and Victory. Each unit moves on table anywhere on the top edge of the table when that units card is first drawn.

Your Initial Force consists of one 3 Company Battalion of Moroccan Regulares.

You must buy the remaining Moors units (we had two more companies) before you can buy the Legion. 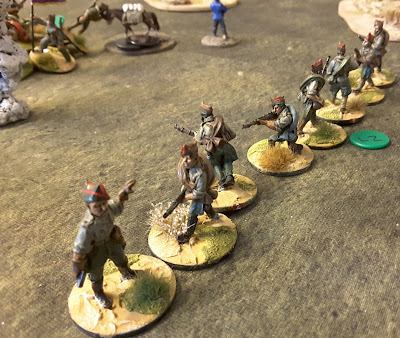 Reinforcements
Normal rules apply, they arrive turn after purchase anywhere on the base line.

Another cracking SCW game here at YG, there really is something about the way our rules work that makes me really enjoy our Spanish Adventures. Wish I had more time and scenarios to game the period.

The Nationalist plan was to mass every thing against Suicide Hill initially and capture that first. Leaving Conical Hill untouched apart from a couple of air attacks meant the odd casualty from enfilading fire but that didn’t slow the Moroccan Regulares down at all. 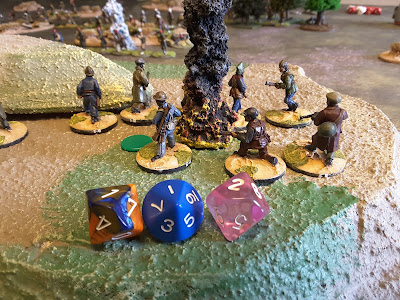 The Republican cause was assisted much when their first round of artillery fire landed in the middle of a Brigade Section taking half the unit out in one hit, not so friendly fire. 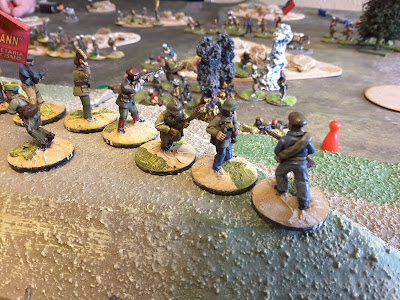 The fighting around Suicide Hill was fierce, taking advantage of the height difference one Brigade Section threw dynamite down on the advancing Moors causing heavy casualties. 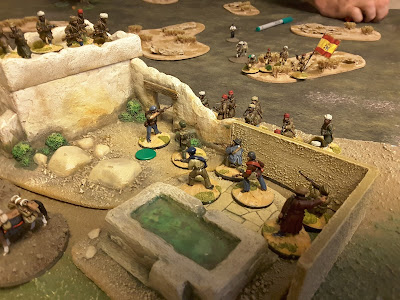 Casa Blanca as in the real battle was the scene of some vicious hand to hand fighting. 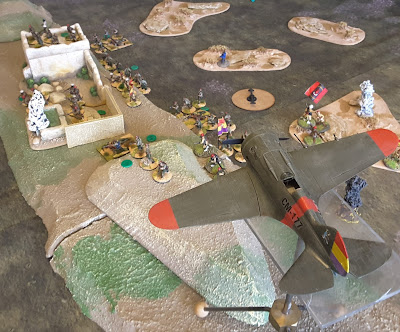 But even air support couldn’t hold back the Nationalist tide. 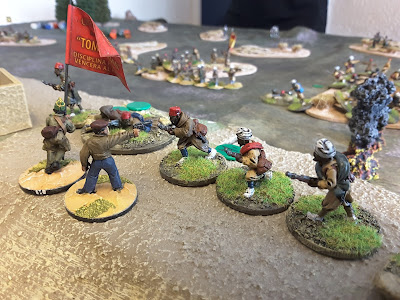 The Moors were too strong and at the end of the first day the Nationalist Forces had control of Suicide Hill. 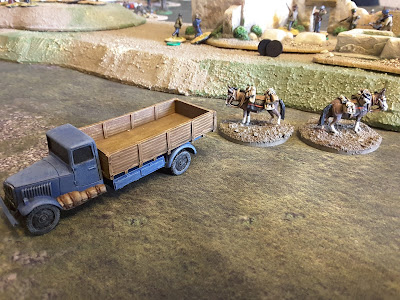 Quote of the day was „I’ll drive straight ahead, you Donkey left and right“

For those unfamiliar we use the Donkeys to ferry Ammo around, the Republicans had gone all posh and bought a truck to carry the ammo a bit quicker. 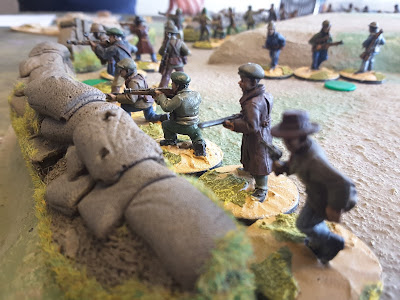 Day two proved to be a more cagey affair, the Republican MGs now had some ammo, although the Nationalist Commanders didn’t know how much. Franco’s boys had spent most of their money on Infantry, the whole of the Moroccan Regulares were now on the table along with a good dose of Legion. 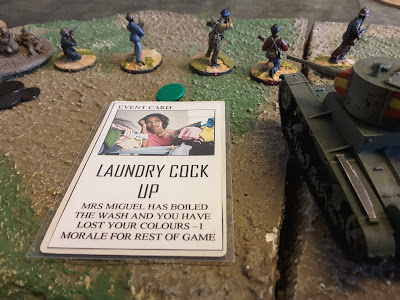 The Nationalists got this lovely Event Card which they gladly awarded to one of the Brigadista units. 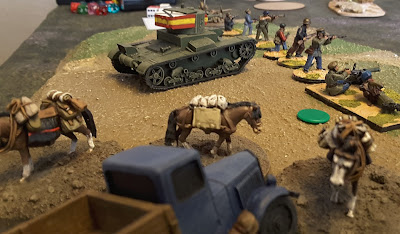 On the first day the Republican money had been spent on ammo and an Artillery Unit which did more harm than good but on day 2 the money had to be spent on the Tiger Tank of the day, the one available T26. The Plateau was now even more secure. 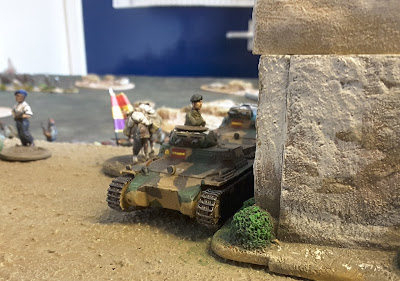 The last gamble for the attackers was to spend all their available wealth on 2 Panzer Is. No match for the T26 but if the combined 10 dice of machine gun fire could cause enough casualties on the British Battalion on the Plateau to allow a final infantry assault before the T26 took them out, it just might work. 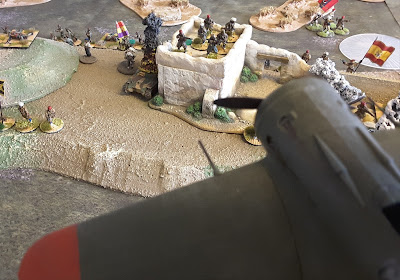 But it wasn’t to be the very turn the Panzer I got in a firing position the Republican commander drew the Air Support card and the I-15 took out the lead tank. Nationalist hopes were crushed and the game ended with a Republican Victory holding on to the Plateau with their last few remaining troops, as they did in the actual battle. 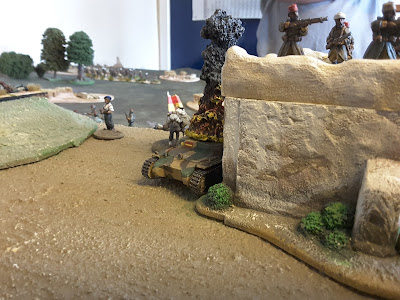 Another great SCW game. It will most likely be 2018 before the collection is back on the table. Should be able to come up with a Scenario by then.