22. Juli 2017Blogs INTComments: 0
This week we finished off the Battle of Garigliano. Peter swapped sides and took over from Don as Gonsalvo de Coroba. Graham took sole command of the now depleted French. I persisted in taking the Spanish at the French bridge because I was determined to get over it and barge my way into Formia. 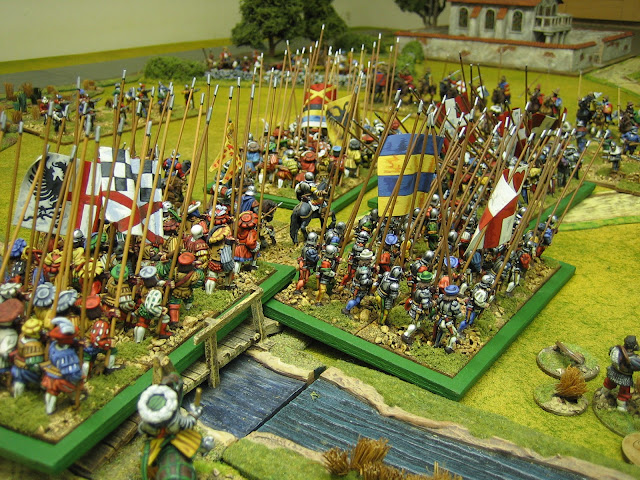 At the French Bridge: The Italians stormed over the bridge and crossed pikes with the French.

The Landsknechts which had, against my wishes, been awaiting their moment finally got the gist of the situation and followed them over (I’ve never rolled so many 10s and 11s).

What followed was a ding dong tussle between the French and Italian pike that went on for four or five turns. Both were shaken and running on fumes but both kept passing their break tests. It was all very exciting.

The leading Landsknechts stormed past the melee into a hail of shot and crossbow fire that reduced them to a wreck. In a last gasp attemept to break the impass the remaining Landsknechts sought to support their Italian allies just as the Italians broke; the Landsknechts lost heart and all were thrown back across the French Bridge, some running faster than others.

The attack the French bridge, which had gone on since turn 1 was finally over. The French had held. 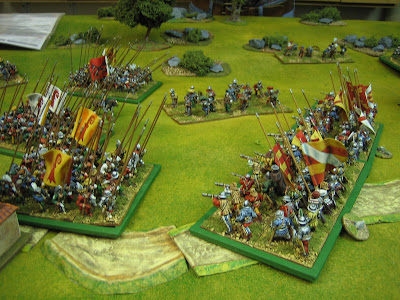 At San Cosmo Spanish colunelas brought the Swiss there under heavy arquebus fire; the Swiss fell into disorder under the withering fusilade and were unable to organise a charge to save themselves. 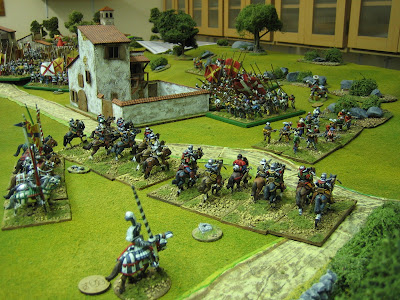 At Castelforte the last remnants of the French infantry there were soon brought to heel and destroyed piecemeal.

The Spanish then took the place with little resistance. 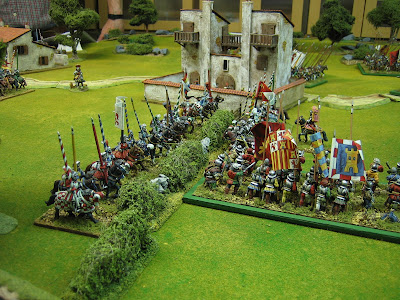 The French now launched their cavalry back into the fray but, it would be too little to late to save the day.

At San Cosmo the last of the Swiss began to withdraw and the Spanish consolidated their lines with the cavalry now released from operations around Castelforte. 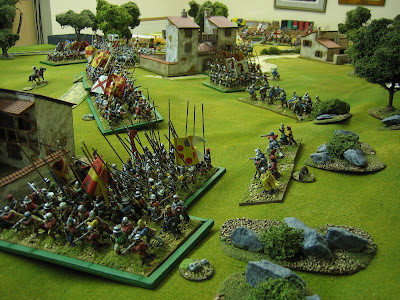 In a last gasp attack, the French commander’s Italian pike tried to regain Castelforte. It caught a colunela, which had just done for the French pike there, in the rear. The attack was repulsed, the Spanish turned, and in a brief fight the Italians were put to flight.

The French army was now in total disarray (P&S broken). The only infantry they had left were the remnants of the French infantry at the French Bridge. Their cavalry was still very much intact but, without infantry to support it, any further attacks would probably prove futile.

A general retreat through Formia was ordered. The battle was over. The Spanish had won.

In the end the battle wasn’t a total victory because I hadn’t managed to take Formia and cut the French line of comminication with Gaeta. This was the same as the historical result so I guess I did as well as expected, holding much of the French cavalry in place while Gonsalvo did his stuff.

It was a great wargame. The scenario threw up tactical problems and opportunities for both sides and the whole thing was rather hotly contested for the whole of the battle.

« Schools Out for SummerNeuling fragen »
➤
Anzeige: