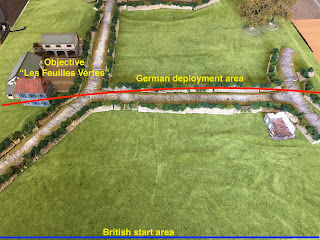 Had a request at the club for an IABSM practice/teaching game. From experience, while the first couple of scenarios in the book are good for this,

I think I’m now a grizzled enough veteran of the game that I can deal with this, so… Time for something a little different: IABSM Lite.
No rule changes, but the scenario was designed to fit on a 4’x4′ with sub-company strength forces and a more tactical approach.
The British had two platoons, three big men including the company CO and three Sherman V’s with a big man, as well as a FOO with two fire missions from a rather busy 25pdr battery (reflected by being 1 pip harder to contact). The Germans, holding the farm, had 1 infantry Zug with 2 big men, an MG42 with another big man, a FOO with a couple of 80mms, and a StuG III. Extra cards were Allied Rally, Allied Heroic Leader, Axis MG Bonus and Axis Dynamic Commander. 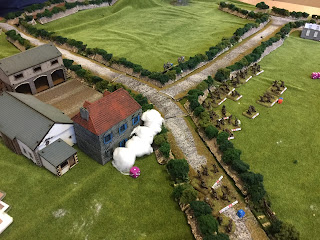 Colin (running the Brits with advice from me) rapidly twigged that there was no cover to be had approaching the farm, so sent a couple of blinds by circuitous routes to see what he could spoke while radioing for a nice big smoke barrage to advance behind.

There was quite a bit of ’no, I won’t bring any more blinds on yet‘ going on, which was slightly more cat-and-mouse than some IABSM games I’ve seen. In the end, he brought two infantry platoons on behind the smoke, and managed to get a good way up the road and across the fields before a flurry of Tea Break cards blew the smoke away.  At which point (having been pre-briefed by both Carl (watching while playing something else) and I, he brought the 2″ mortars into play – the German section in the red-roofed farmhouse took a fair bit of tap, but things never quite panned out to get them pinned preparatory to a close assault. 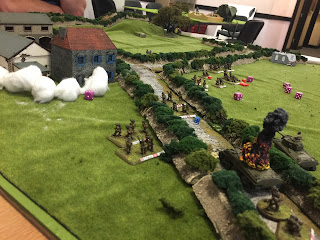 With hindsight, I should have reminded him a bit more than I did that HE pins, and he should probably have brought the Shermans on before the second platoon, to plaster the farmhouse and guarantee some pins behind which to close assault. As it was, when they came on, the StuG (up on the road across the back of the table) picked off first one, then another, in consecutive activations.

The Brits also lost a couple of sections to enfilade fire from the farmhouse, which I think wouldn’t have happened had the Shermans been around to do their job. In the end, the infantry in the farmhouse were down to 5 figures and 4 shock, and two platoons went in and basically forced them out in a tied close assault due to excess shock.

We pretty much left it there, not least so we could talk about it: essentially taking the farmhouse had cost the British two Shermans and half their force, but the Germans were down to one section, an MG and a StuGIII which had a pretty commanding view of the battlefield. It would have been interesting.

I think it works: the tricks are:

I think this last is pretty key – to keep things moving and make them interesting (and also to show off the ‚magic‘ of the big man concept), you need to have slightly more big men than the normal org chart suggests – I’d even go as far as to suggest that some platoons should have their 2inC on table as a big man as well as the Lt.. Colin was, I think, pretty impressed with the flow of the game, and the way the big men worked – there was a moment were he had a big man hare back down the road to activate the 2″ mortar which just felt right.

You might possibly consider, if you go with platoon 2inCs as big men, leaving the actual platoon cards out – I dunno? Thoughts?

I’m toying with a few more smaller tactical teasers like this – I think it could be fun and it can finish in a club night.