12. Mai 2018Blogs INTComments: 0
Sunday night saw the Wyverns give Battlegroup a run through.
Flicking through the vehicle stats for frontal and side armour took me back to my early days and WRG’s 1925 – 1950 rules.
Over the years I have tried most of the rules on the market, Battlegroup- Pz Grenadier, Rapid Fire, Bolt Action, Flames of War and Chain of Command to name but a few none of them have really stuck and all find themselves filed away just in case…
I don’t have a large WW2 collection and like to add armour odities here and there. I never liked the mass ranks encouraged by Flames of War so the the attractiveness of Battlegroup is that the game is scalable, enabling you to field a squad, platoon, company or even battalion. 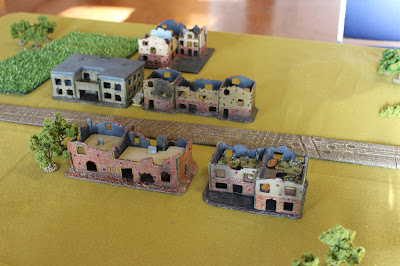 We threw down some terrain and picked 500 points per side.
The rule suppliments are full of variants and upgrades to various formations, from Volkssturm to JSII’s.
The order phase allows you to give basic movement and fire orders to resupply or calling in artillery or unpinning units. The better your quality the more additions to 2D6 you get to order each specific unit.
With two actions per turn “Ambush Fire” is particularly useful for slowing the enemies advance. 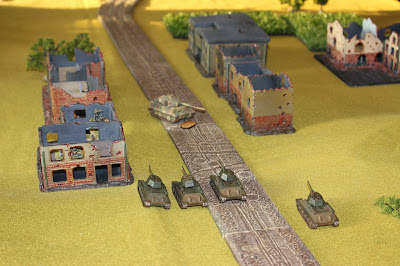 One of the nice features is the Battlegroup system is the use of “Battle Rating Counters.” At the begining of the game, each side has a “battle rating,” a number which defines your force’s morale. Each time a vehicle is destroyed or infantry squad wiped out you pull a battle rating counter from a bag. You keep this a secret, your opponent can see how many counters you have but has no idea what they are worth.
To rally up to 1D6 units you have to take another chit.
With chits worth between 1 – 5 you never quite know how well each of you are doing. It certainly makes you take a little more care of your armour.
When you army reaches its battle rating, you have lost. 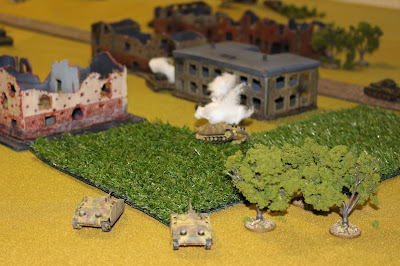 Some counters instead of a number allow you to call in an airstrike or result in low ammo or a vehicle breakdown which gives you an excuse to bring on supply units that never normally grace the wargames table.

An enjoyable game for a first out with not that much reference to the rule book.
It’s driven me to dig out those 15mm Buildings that have sat in the cupboard of shame for a few years so they can’t be to bad.

No plans to add to the Late War Collection but I have priced up each of the elements so I can pull together a scratch force with little or no planning.