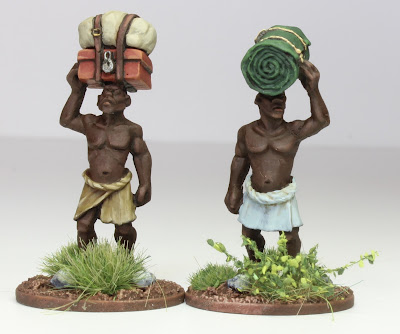 Now I was hoping that with the start of the summer holidays that I would find myself with hour upon hour of precious hobby time, sadly this has proved not to be the case!  The ubiquitous ‚things to do‘ list seemed to grow exponentially, not unlike the weeds in our garden, and as the academic year came crashing to an end, I just stopped.  Now feeling a little more rested I have started to build a routine that will hopefully allow me to return to Blogging with more vim and vigour.

As I mentioned in my previous post the hobby focus for this summer is to host a game of ‚Congo‘ and with a couple of dates in mind it has been all steam ahead!  Now I had thought that I had assembled and prepped all the miniatures required for the scenario that I have in mind, but only the other day I found myself making yet another order to ‚North Star Miniatures‘ for something that I just couldn’t live without – it would appear that you can never have enough Ruga Ruga! 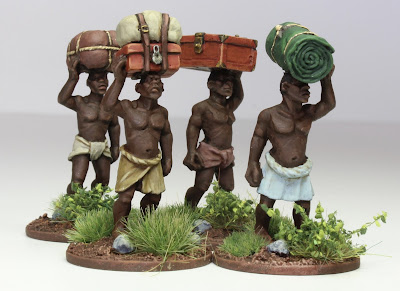 Anyway, I digress, but let me assure you, good reader, that miniatures are being painted and jungle is steadily amassing and so to keep up with progress, I thought that I would share these four ‚Wargames Foundry‘ Bearers.  Essential to any expedition, Bearers in ‚Congo‘ are a relatively cheap addition to the column and whilst don’t add anything to the group’s firepower or melee potential they do allow the group to ignore the effect of a movement stress token*, hopefully giving the intrepid explorers an slight advantage as they race to capture the sacred objectives.
*The token still counts as a stress token though.