22. September 2018Blogs INTComments: 0
I suppose this would’ve been called a „mini-diorama“ in days gone by, but vignette is the norm nowadays. These are mostly some of the Black Hussar minis from a recent first time order from them (actually I think it’s a one-man show there). 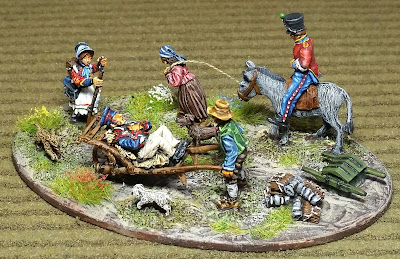 The peasant woman pulling the donkey comes with the wounded infantryman set – she’s supposed to be pulling the cart. The donkey is an unknown make which was purchased from a vendor at an Enfilade convention a few years ago; the 9th Hussar atop the donkey is a left over plastic Perry figure from the Chasseur a Cheval set. The three pooches are also Black Hussar figures, and the little white one looks just like my wife’s doggie. The stack of rucks and ammo crate are from a Sash and Saber artillery set. 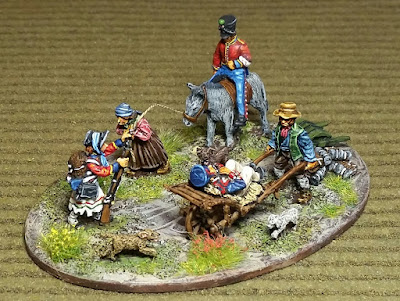 The 3mm thick plywood oval base is from Hobby Lobby – a set of 8 for under $2 with the 40% off coupon – yes, I use coupons whenever I can. 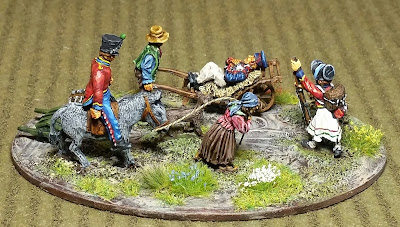 The „rope“ the peasant lady is using is a length of thread which was first soaked with white glue then dry brushed. 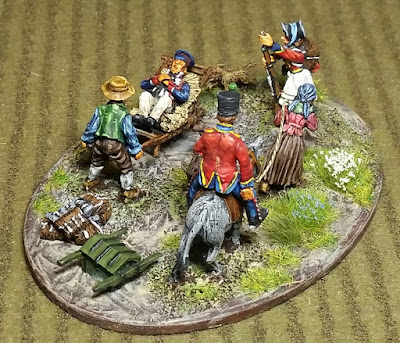 The hussar’s coat tails were originally sculpted flared back as if riding at a gallop. They were snipped off and then reposition with some scalping away from the body and gaps filled with Green Stuff. 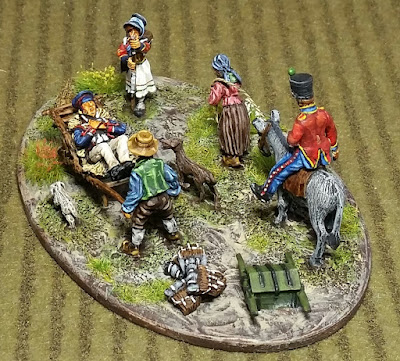 The bandage on the hussar’s left arm was also molded with Green Stuff – about the extent of my sculpting abilities. 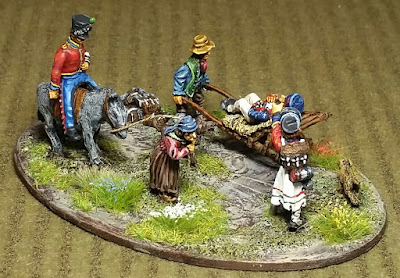 This was a nice break from the usual work on multiple figure units and the hardest part was trying to coordinate the colors of the civilian attire. Thank you all for dropping by and happy gaming and/or painting!