Yesterday we played our very first game of Blood Eagle, skirmish wargaming in the Viking Age. So why not write a Blood Eagle AAR? First of all: we had a great time and there was a lot of laughter.

So what’s Blood Eagle all about? 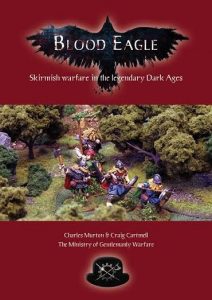 Blood Eagle is a skirmish game. It is published by Ministry of Gentlemanly Warfare and distributed by NorthStar.  You play with 4 – 12 miniatures most of the time. So you need fewer miniatures than in other rule sets like SAGA for example. The book contains some army lists for different factions. You can also find guys like Ragnar Lothbrok or Uhtred in the lists. Which I find quite funny. The game is for 2 players and uses an alternate single model activation.

To play Blood Eagle you need some appropriate miniatures and two d10. Also, the rules recommend using a fair amount of terrain. But, how does it play? Every round you roll for initiative, adding your leadership value to the result. The player with the higher modified initiative goes first, moving one miniature. Then the other player moves one miniature and so on. Winning initiative is also important in combat because the winner chooses the first attack and hits first.

We chose a scenario, in which the great hall has to be defended. The attacker (my mate) has to enter the hall. If at least 3 of his figures could survive the round after they entered the hall, then he had won. The defender (me) has to stop the attackers. Well, Blood Eagle is a rather bloody rule set so stop them means to kill them. We are playing Dark Ages, aren’t we? But let’s take a look on the armies. Because this was our first game, we chose rather small warbands.

The defenders: 1 Jarl, 1 champion and 2 berserks. 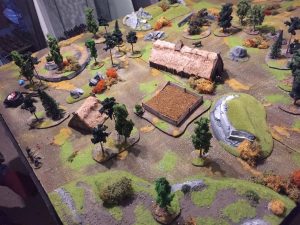 The gaming table with the great hall in the middle. 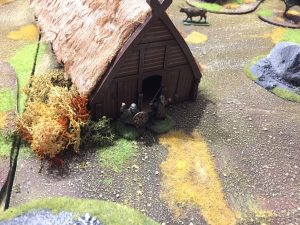 My Jarl (the guy on the right) and one berserk standing guard. All quiet and peaceful. Just an average day in our small village. Hell, even the cattle in the background seems to be bored.

If it sounds too good to be true, it probably is. And here they come. From north and east, you can see the attackers sneak up. Hiding behind some trees, they try to infiltrate our settlement. 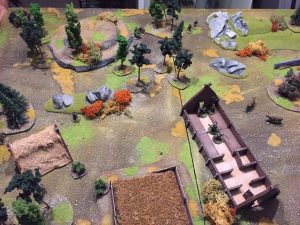 The attacker approaches the great hall. Seems, that they plan to burst through the front door. But of course, the defenders noticed the movement and build a small shield wall behind the door. Well ok, it’s not a proper shield wall, just the champion (on the right) and a berserk blocking the door. The Jarl and the second berserk are near by, for backup. Even the cattle seem to be curious what happens next. 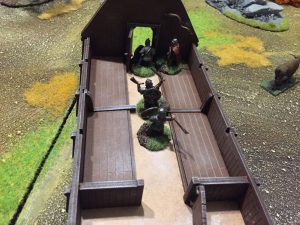 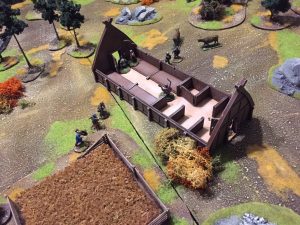 The attackers come closer. But it seems, they don’t want to fight. Instead, they try to sneak up the back door. Odin is furious, seeing such a cowardice. But the defenders are aware. One berserk is now guarding the back door. So everything is fine. Expect that there is still no bloodshed. But stay tuned, things are getting serious in just a second. Well, I write a Blood Eagle AAR, so there has to be blood and action of course! 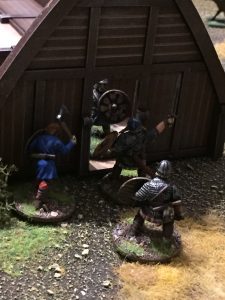 The opposing Jarl (the guy, who raised his sword) followed by a veteran and a novice is approaching my brave berserk. But pressed into the tiny space of the door, their numbers are meaningless. The Jarl is instantly slaughtered by my berserk. Meanwhile, the attackers break through the front door. But my second berserk already awaits them, killing the first attacker. A berserk, in name only. After that, a veteran tries his luck and attacks my berserk. My mate rolls a natural 1 and had to make a fate check. Again he rolls a natural 1, destroying his weapon. Unfortunately, my berserk can’t make a second attack in this round, so the gods allow the doltish veteran to live on.

In the next round, the attackers withdraw from the front door, trying to make a shooting attack at my berserk. Both miss, losing a dagger, a throwing axe and their honor. The opposing veteran is now unarmed. On the backside of the great hall, the enemies manage to kill my berserk. Valhalla awaits him! 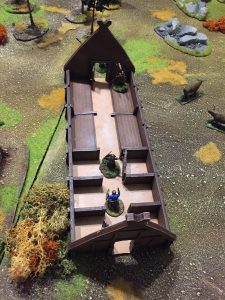 In the last round, the enemy is desperate and storms the hall. My Jarl, seeing his berserk dying, rushes in and kills the enemy veteran. Now the novice has to face his mighty sword. On the other end of the hall, my berserk starting a counterattack on the unarmed veteran and cut him to pieces. The second enemy doesn’t do anything to help his unarmed comrade. Instead, he sneaks into the hall, running straight into my champion, who kills him. The remaining novice, all alone, hasty runs away.

The fight is over, the game won and the crows are feasting on the fresh corpses. My Jarl is furious because the last coward could escape. But after some time he realizes, that the novice will tell the story of the horrible defeat among his people. They would never dare to attack our tiny settlement again!

We had a great time playing Blood Eagle. The rules are fairly simple and you don’t have to consult the rule book very often. But keep in mind, that this was our first game. We don’t use magic and stuff like that. In my opinion, Blood Eagle is a good game for people who like a more narrative style of wargaming. I guess it won’t be the first choice if you want to play competitively or if you are quite serious about a simulation of historical battles. But if you want a rule set for some beer & pretzel style gaming, I can highly recommend Blood Eagle. I hope you like my Blood Eagle AAR. What do you think about Blood Eagle? Let me know in the comments.