Breakout into Brittany Build Up 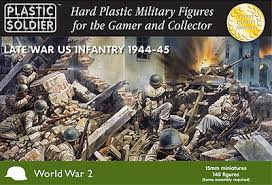 I’ve been planning the Summer Project this week, which I’ll be packing for the holidays at the end of July, so have decided to go for the Plastic Soldier Company option rather than do anything in lead. I have a US starter company box set for this but this only came with one sprue of plastic infantry, so I’ve found a second hand, unused box set on eBay for £14 to fill out the ranks of GI’s. These figures wouldn’t be my first choice but you can’t really argue with 145 of them for £14! 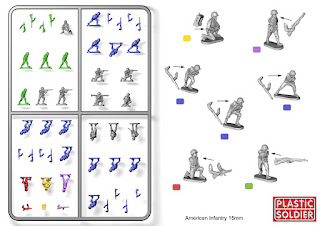 The PSC infantry are much smaller than either Peter Pig or Battlefront figures, so can only really be used alongside other PSC stuff. This isn’t a problem, however, as I can also use the PSC Fallschirmjager and late war German infantry sets, which are perfect for the campaign in Brittany in 1944. I could even make use of the early war infantry for naval troops or second rate Ostruppen units.
I now have pretty much everything I need to get started on the US forces for I Ain’t Been Shot Mum, although I would quite like some PSC M4A2’s or M10 tank destroyers to add to Task Force A. There’s plenty of options in the IABSM support lists to build upon a basic infantry company, so I have lots of choices as long as it fits with the historical units involved.