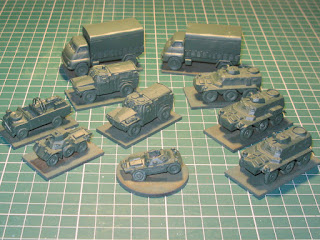 I haven’t done much for the Sandbox Skirmish project lately, as the festive season has started to take a toll on my weekends and at work, but I did get all of the British vehicles undercoated yesterday in Humbrol Dark Green. This seems a bit counterintuitive, given that they are deploying to the desert, but the plan is to paint the green camouflage first, followed by the desert sand camouflage second, using a three layer approach to bring out the detail. The undercoat does cover up a multitude of sins as well, which means that my prior filling, sanding and filing really paid off. 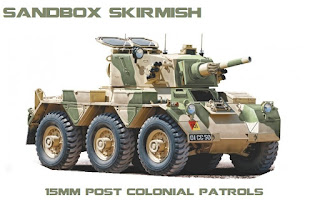 I didn’t have any desert sand spray anyway, so the single can of Matt Dark Green seemed like a good option. The end result should look good either way, as I’m aiming for something like the Saladin in the artwork above, using a toned down palette rather than a bright desert yellow. I’ve left the QRF  Saladin out of the selection of models, however, as it’s a bit too powerful and this is an infantry based project, so it might dominate the game a bit too much. The Humber Pigs and Saracens will be more than enough to provide a bit of armoured protection and fire support.
I’ve now decided to give myself a rest and pick up the Sandbox Skirmish project in the New Year, as I really don’t have the time at the moment to do it justice. It will be back in January! The good news is that I am ready to start painting the figures and vehicles now, rather than being bogged down in endless terrain building. I can take my time over this and, hopefully, do a good job, which means that I will then be able to crack on with the rebel forces afterwards.