Clouds in Bag the Hun 2 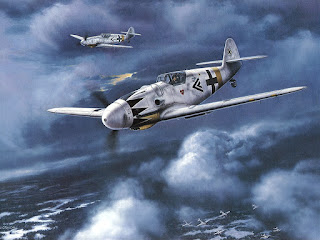 There are some perfectly reasonable rules for flying in cloudy conditions in the optional extras bit of the Bag the Hun 2 rulebook (Section 20.3 p52-53). However, for the scenario I’ve devised, I needed something with a little more detail that would impact on spotting and firing as well as movement. I’ve come up with the following simple tweaks that bolt on to the existing rules for disorientation and extend the rules for Cloud Facts (20.3.4):
Spotting
Shift one column to the right on the Spotting Table for low visibility when spotting at Altitude 1, 3, 4, 5 and 6 (replaces spotting into the sun). It is not possible to spot bogeys at Altitude 2 (see Cloud Facts 20.3.4 p52)
Firing
Add a -1 firing adjuster for attackers at Altitude 1,3,4,5,6
Add a -2 firing adjuster for attackers at Altitude 2
Add a +1 saving adjuster for defenders at Altitude 1,3,4,5,6
Add a +2 saving adjuster for defenders at Altitude 2
I originally allowed spotting in the overcast layer with a hefty modifier to make it very difficult but, having re-read the rules in more detail, this wouldn’t fit with the existing mechanics. As a result, it isn’t possible to spot bogeys in cloud cover but, if an aircraft enters the cloud layer in a pursuit, it is still possible to get in a shot or two only with considerable difficulty.
This matches with the account of the action concerned as the 336th FS and 335th FS pilots did chase the Bf-109’s into the cloud, firing at them on the way but then pulled out when it became too hairy:
‚I lost him in the thick clouds. When I could no longer see him, I feared collision. I dropped below the overcast and made an orbit, at which time I saw a fire and wreckage of an aeroplane. I believe he spun out and crashed‘ (1st Lt John Kolbe, 335th FS, 4th FG)
I think this fits with the letter of the existing rules and adds a bit of clarity to an otherwise obscure element of the game. I’ll have to see how it all works (or not) next week?