Come And Have a Go If You Think You’re Lard Enough! 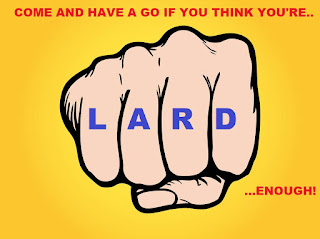 The reason I’ve been working out the Bag the Hun scenarios over the holidays is that I’ve volunteered to run a couple of games at the Sarisbury Green club Lard Day in March. The organiser, Mark Backhouse, invited me to attend so I thought it would be only fair if I offered to run a game for the day, as he was looking for a few more to fill some gaps. It now looks like he’s got more then enough games and plenty of players, so I’m sure it will be a splendid day out, especially if you are a Chain of Command or Sharp Practice fan.
There’s another separate Bag the Hun game running on the day but I’m hoping that I’ll get some players for my scenarios, if only for one of the two sessions. I’ll definitely be umpiring the Berlin ’45 game, which I may well re-name ‚Bogeys Over Berlin‘ or something similar, just to make it more funky. If there’s demand, I will also run a second game which will be either the ‚S-Boot Strike‘ scenario or, if that doesn’t work out in playtesting, an off the shelf scenario from my archives, most likely the ‚Special Delivery‘ Malta game that is published in one of the Too Fat Lardies Specials.