Confessions of a Re-Baser (Unrepentent)

1. Juni 2018Blogs INTComments: 0
As it happens, no sooner our annual big convention, Enfilade! is over, I’m already starting to think of next year’s games. Looking into my cabinet, I noticed my remaining Napoleonic figures – mainly Perry plastics – hadn’t been on the gaming table since 2012. I’m still deciding what rules to use, but whatever is decided upon will be quick play for convention players. It may be either a version of Lion Rampant or a modified/simplified version of Black Powder. In any case, I wanted the cavalry to be on 50mm squares; they were previously singly-based. The French skirmishers were based 4-figures per 40mm squares, but have been re-based 3-figures per 40mm, like the British Rifles already had been. I ran out of 50mm squares so am awaiting the arrival of more from Litko to complete the KGL Hussars. 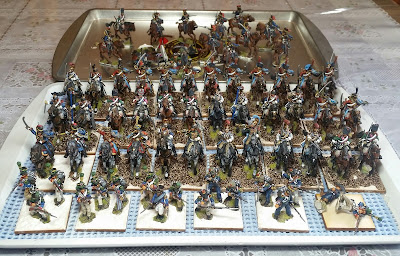 As normal for me, the figures are plopped onto the bases using acrylic caulking. I also need another Voltiguer figure to complete the last stand. They’ll be used in units of 6-figures each . Thanks for stopping by and best wishes to all.