Crom: A Skirmish Game set in the Hyborian Age 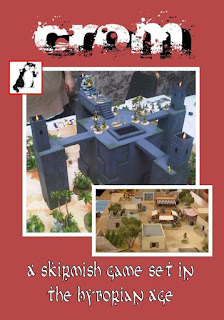 I have been thinking about some fantasy skirmish gaming for a while, having failed to get Frostgrave off the ground due to the not insignificant body count, terrain and time required, with something equivalent to a Fistful of Lead in terms of scale. I stumbled across the Crom’s Anvil site the other day, by way of the Wargames Website, and thought that the Crom rules using 15mm figures sounded interesting.
The Crom rules are based on skirmish gaming with a handful of figures in a Conan the Barbarian style, with the use of 15mm figures rather than 28mm as an added twist. The Crom’s Anvil range of 15mm figures and terrain is what grabbed my attention, especially the way that the lovely Copplestone Castings 18mm figures have been used as a starting point, with very real advantages in terms of cost and space required for a decent terrain set up.
By scaling down to 15/18mm the playing area can be reduced to no more than a 60cm square board, which would be very easy to produce on one of those cheap canvas picture frames, with some scatter terrain position on top. As much of this is of a desert or arid appearance the effort required to create it would be minimal and I already have some 15mm Blotz laser cut middle eastern style buildings that I could use. There are only a handful of figures required too,

The Crom rules themselves are only a fiver from Matakishi’s Workshop via Wargames Vault. They use a neat card driven, dice pool system and opposed rolls to make movement, combat and magic use really tactical, although they might take a little getting used to. There are some after action reports in a linked campaign narrative format on the Crom’s Anvil site and the Crom Companion includes a breakdown of a typical introductory game, so you can see how the system works for real.
I may well give this some more thought…..
http://www.matakishi.com/apps/webstore/products/show/3525005
http://cromsanvil.co.uk/chronicles.html