Day Fighters in Defence of the Reich 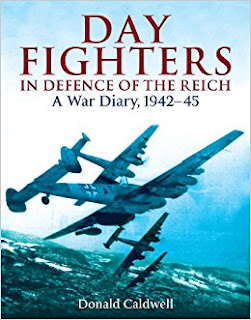 I am working up the Rocketeers over the Reich scenario this weekend, ready for the Bag the Hun game on Tuesday next week. I have plenty of information on the 336th Fighter Squadron part in this, with a second pilot, 1st Lt Douglas Groshong,  now added as a Veteran character card in the scenario in the role of Charlie Flight leader. I also have some ideas for the initial scenario set up and the way that bogeys will work, with specific reference to the overcast and low visibility. This is a challenge to get right, as I don’t want it to complicate things but I do want to make it a feature of the action, just like the real thing.
What I needed was more detail on the Luftwaffe units involved, as all I knew was that they were equipped with Bf-109’s, either Gustavs or Karls. This book has helped to fill in some gaps and has given me some direction in terms of the unit that may have been on the receiving end, possibly III/JG4. There are some really interesting eyewitness accounts for November 21st too, although they are both from FW-190 pilots, which confirm that many of the pilots were straight out of fighter school, so will be rated as Green. I’ll have to factor that into the scenario without making things too easy for the 336th! I’d also like to identify at least one pilot as a more experienced Veteran or Ace Schwarm Leader.