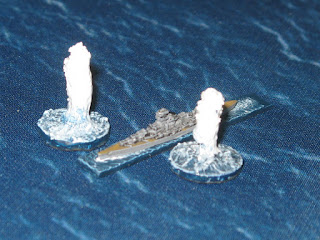 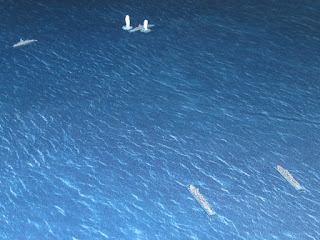 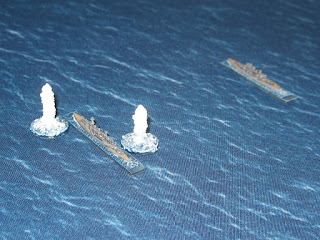 I had a go at the Denmark Straits scenario this afternoon, better late than never, using my 1/6000th scale ships and Victory at Sea. I’ve have played games using Victory at Sea several times before and have a reasonable handle on the mechanisms. However, by Turn Three, I gave up as it just wasn’t much fun. I’ve always been a bit underwhelmed by Victory at Sea, to be honest, but it’s the club rule set of choice for WW2 naval games, so it’s what I’m used to.
This solo game, however, was just a bit of a drag and so I packed it in early. The Hood had already received six damage points and Bismarck had two but I couldn’t be bothered to carry on, especially as the dog needed a walk and it’s a nice day outside. I may well have another go at this but using Naval Thunder or similar, as Victory at Sea juts didn’t float my boat this time round. I guess I’m just used to having more fun with my naval wargaming?