Desert Spitfires RAF ‚What If?‘ 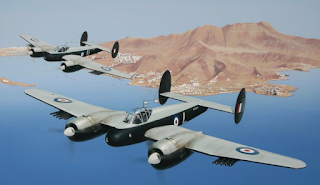 It’s a bit early to start mucking about with the Desert Spitfires rules but, in a moment of reckless abandon, I thought I’d get some Bristol Brigands to add to the RAF ranks. These were just being introduced into service in 1948 and could, theoretically, have made an appearance over the front lines during the war. In fact, from early 1949 onward No.84 Squadron operated the type from RAF Habbiniya in Iraq, where PR Mosquito reconnaissance aircraft often re-fuelled for flights over Israel.
However, for most of the first half of 1949 only a handful of aircraft were serviceable and there were numerous problems with spare parts, ammunition and even cannon being in short supply, not to mention enough trained aircrew. The aircraft also had a reputation for serious mechanical  issues and going u/s due to ‚wrinkling‘ of the wings! Even so, despite it’s terrible reputation, I quite like the stubby look of this light attack bomber and so will paint some up for the game, even if I can’t think of a good reason for them to be directly involved?
http://www.brigandboys.org.uk/