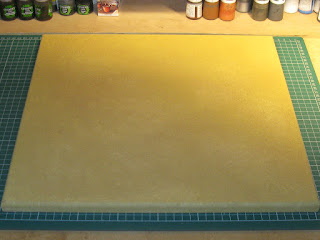 I got home this afternoon from Cornwall and have had a quick flick through of the Sons of Mars rules that had arrived in my absence from Firestorm Games in Cardiff. The first thing I looked for was the size of arena that I’d need to use, which turned out to be a 18″ to 24″ area for most of the arena matches. I had thought of scratch building one of these ages ago, using some Warbases laser cut Roman walls and gateways, but didn’t get round to it, although the various mdf bits are still knocking about somewhere in the garage. 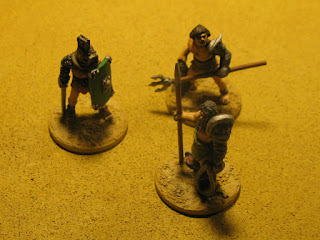 Anyway, I needed something to stand in for an arena or ludus training ground, so had a rummage and found a couple of 16″ square cork fronted pin boards. These were being chucked out by my daughter a while back and I had salvaged them for just this sort of thing. I’ve given one a basecoat of Homebase Dusky Yellow emulsion paint, a pot of which I grabbed in a sale last year, with a stippled and dry brushed top coat of Laura Ashley Old Gold from a used tester pot. I have a stash of these old tester pots and rarely throw them away, as you never know when they might come in handy.
It’s all drying at the moment but I will add a few light dry brush patches of Foundry Base Sand later on, which is the shade that I used on my gladiator bases. It looks like a good match for these already but I can only see for sure once it’s fully dried out. If it has worked, I may well paint up the second board so that I can use them together and have a look for those Roman wall sections to add some features to my rather spartan provincial ludus. I have some obstacles, pillars and trap doors somewhere too but I have no idea where I’ve put them!?