14. August 2017Blogs INTComments: 0
Ordered another box each of Perry WotR Infantry and Foot Knights. Here are most the infantry painted up as yeomen for a retinue belonging to the Earl of Oxford. Granted their livery coats should have a blue star (or boar), but I was too lazy to paint the badges. In fact, I have a pack of Citadel Six blue star „decals“, but they are too fiddly for me.

The color of the livery coats is termed by some as „Tawny Orange.“ This is a kind of dull orange which I made by mixing Vallejo Game Color Orange Fire (72.008) and Bronze Fleshtone (72.036) – mostly because these were the closest colors in the starter pack I have. The color seems pretty close to what I would think „Tawny Orange“ should be.

These are 36 of the 40 figures – broken down into three mixed units of bows and spears for Lion Rampant. The four other figures are the fully-armored guys who’ll be used in Foot Men at Arms units along with the figures from the Foot Knights set.

In retrospect, I now wish I ordered the Army deal of 5 boxes of WotR Infantry – seeing how I painted up 4 boxes. Next time I start a project I think I’ll go big – at least if there are „Army“ deals like the Perry’s offer. 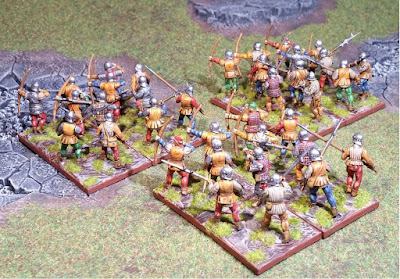 The Foot Knights are pretty much done too, but the guys wearing the jupons/tabards need some thought. That’s all for now and God Bless you all!