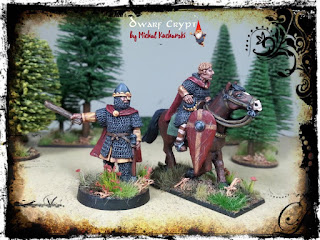 „Thus the monarch, who was terrified among the people of so many provinces, had been abandoned naked and without bed, deserted by children and those he had kept, and the funeral money had to be laid by someone else and there was not even room to bury him; By eating the same delicacies, it disintegrates, making the sages and fools aware of how temporal power is … „

I am returning today to the subject of Wilhelm the Conqueror, initiated in the first entry.
Our story ended with the Normans defeating the Anglo-Saxons forces at the Battle of Hastings. But this is not the end of history.

Chasing the country
Wilhelm left the  Hastings and headed for Dover. On the way, in retaliation for the crew of one of his boats, he burned Romney city.
Dover did not want to die and surrendered to Wilhelm, which did not prevent the prince’s men from setting fire to the suburbs. Meanwhile, Wilhelm’s army broke out of the epidemic of dysentery. The strength of the duke strengthened the adventurers, who at the news of the success they drew under the norms of Prince Normandy. Wilhelm’s next target was the headquarters of the Archbishopric of Canterbury, which surrendered without a fight. The „bastard“ went on to London, where after the battle of Hastings the mighty Anglicans chose the king of the last king of Wessex, Edgar II. However, Wilhelm’s quick successes made the new king quickly lose support and enthusiasm.
In Canterbury Wilhelm collapsed and spent a month in bed. At that time, a message was sent to his camp from the wife of Edward the Confessor, Queen Edith, who surrendered to Winchester.

After recovering, Wilhelm moved to London. He limited himself to the desolation of the area, and departed from the city. Meanwhile, Edgar’s party dissipated. Wilhelm was succeeded by the archbishop of Canterbury Stigand, later by other mayors, and finally at the beginning of December in Berkhamsted, King Edgar himself surrendered himself. Wilhelm entered London and on December 25 he was crowned at Westminster Abbey and received tribute from his Anglican subjects.

The conquest of England was not completed yet. In March 1067 Wilhelm returned to Normandy, taking with him the most important Anglo-Saxon magnates. Meanwhile, in Mercia, not covered by serious military action until now, Edryk the mad, a descendant of Merlion’s descent, rebelled. The rebels also broke out in Exeter and Kencie counties. By mid-1068, Harold II’s sons arrived in England at the head of the Dublin-based fleet. Wilhelm also escaped Edgar II, who found shelter in his brother-in-law, King of Scotland Malcolm III, and acted to regain his throne. Earl Edwin and Morcar rebelled against Wilhelm, allied with Welsh Gwynedd Bleddyne, and raised all Northumbria. In opposition to the rebels, there were discrepancies about the possible succession of the throne to Wilhelm, as well as the rapid action of the new monarch.

The uprising in the southern counties was not too large and Wilhelm had no trouble with his suppression. Concentrating on the army, he entered Mercia.He acted there according to his favorite tactics of building castles and operating cavalry. The Anglo-Saxons proved helpless. After suppressing the uprising in Mercia, Wilhelm headed north to York, burning and destroying everything in his path. York itself remained uninhabited for many years to come, and the Northerners‘ march even appealed to the chroniclers as „gehenna“.

In 1069 England attacked Denmark’s King Swen II Estrydsen, but he did not manage to beat Wilhelm. In Northumbria, supporters of Edgar II triggered a revolt that ended like the rest. The Ætheling’s position in Scotland deteriorated, and in 1072, under the threat of armed intervention, Wilhelm forced King Malcolm to expel Edgar, who had gone to Flanders, to finally arrive at William the Conqueror after a few years. In 1075 broke out so-called. Earl’s revolt, which ended like all previous ones. Approx. Year 1080 expired all active resistance against Norman rule. In 1081 Wilhelm made an invasion of Wales, removing the danger threatening his power.

King of England
William the Conqueror’s government marked the beginning of a new era in the history of England. Within a few years after the Battle of Hastings, the Anglo-Saxon class was practically completely replaced by the continents. The lucrative dignity, both secular and ecclesiastical, was attributed to the Normans and the people associated with Wilhelm. For killing Norman man threatened higher head than killing Anglosas. Great taxes were levied on the population (apart from them the treasury had other revenues, such as the precursors, the Danegeld, the city tax, the Jews, the customs duties, etc.) to fill Wilhelm’s ever empty treasury. Earth goods were confiscated or redeemed for the innocent by the winners. In addition, it turned out that the new elite did not intend to model the Danish invaders from the early eleventh century to assimilate with the local.

With the Norman conquest, a full-fledged feudal system appeared in England. The whole territory of the country was recognized as the property of the king, who could give the land to his vassals. The strict royal domain included 1/7 of the territory of the country, mostly the most fertile. In the royal domain the forests were converted into hunting reserves where hunting was prohibited under the threat of hatching the eyes. A principle other than the continent was introduced that „the vassal of my vassal is my vassal.“ Wilhelm also avoided broadcasting compact lenin complexes. Territories, though numerous, were scattered over many counties (eg Robert de Mortain obtained 693 dignitaries in 20 counties). Exceptions to this rule were border counties such as Cheshire, Durham and Kent. The last two were commissioned by the clergy, Cheshire was transformed into a military march.

Wilhelm also built castles (including Tower of London) throughout the country to keep the conquered country in obedience. His domination began with the dominance of the upper classes of French culture and language, which lasted until the fourteenth century. Wilhelm also reviewed Anglo-Saxon law and enriched it with Normandy elements. The public judiciary was under the control of royal officers, mainly sheriffs, responsible for collecting taxes and maintaining peace in their county.At Wilhelm’s command in 1085-1086 the English counties developed a register of buildings, land and cattle and cattle. The census was carried out, mainly to make sure that taxpayers were aware of who to impose taxes on.

Death
The war with the firstborn son lasted from 1077 to 1080 and ended with a settlement. At the end of his life Wilhelm entered the war with the King of France. During the siege of Mantes, an important city on the French-Normandy border, Wilhelm fell off his horse and was seriously injured. The wound was deadly. The king was transported to Rouen, where his younger sons, Wilhelm (the favorite son of the conqueror) and Henryk, stood next to his bed. Robert remained at the court of the King of France, yet Wilhelm handed him Normandia. The crown of England fell to Wilhelm (settlement with the king of France in 1066 predicted that after the death of William the crown of England and Normandy would be separated), while Henry received 5000 pounds of silver. Having written generous donations to the Church and the poor, Wilhelm died on September 9, 1087.

He was buried in the monastery of Sts. Stephen in Caen, who himself founded. It was not without a hint. One of the townspeople Caen, named Ascelin, opposed the burial because he claimed that Wilhelm illegally built a monastery on the land belonging to father Ascelin. After verifying the truthfulness of this statement, the bourgeois paid 60 solids of compensation and went to the burial. It turned out, however, that the prepared tomb was too small. So the body began to squeeze into force. At one point, it cracked, showing the torn belly. Despite the scent of incense, the corpse was a terrible odor that the mourners had heard.

The horseman and the latest infranty model is Wilhelm from Crusader Miniatures. Sculpture figures are not bad and I think they will look good with another coming Norman.
I invite you to watch 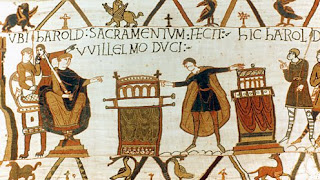 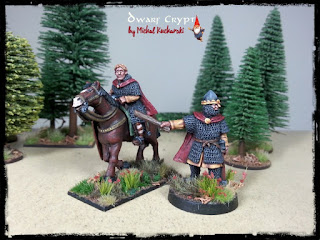 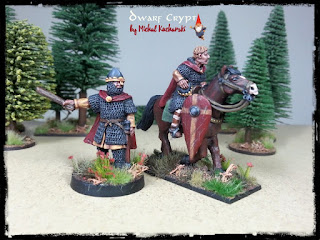 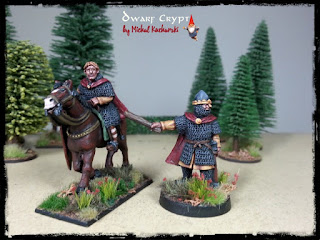 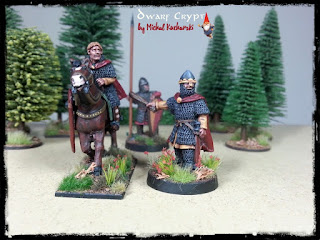 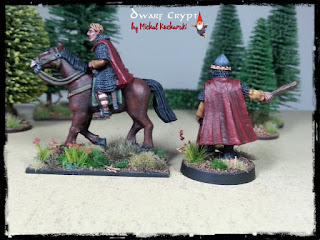 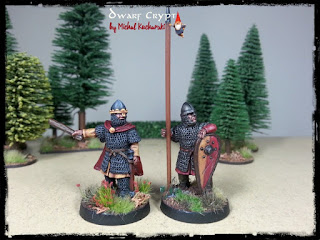 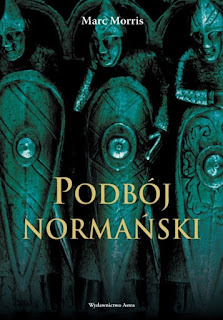