19. Juni 2017Hersteller ENComments: 0
It is with great pride and delight that Alternative Armies re-releases the entire re-mastered CE range of High Elf codes.  The Crystal Elf Empire ruled over by the Empress Morgana.  The fore runner of the Ferach Empire of the Emperor Mordred who is with this range still only a Crown Prince. Fantastic for any 28mm fantasy system and comprising more than sixty poses of infantry, cavalry, characters and sets to choose from as packs or single figures as well as two excellent saver multitudes giving you one of everything. 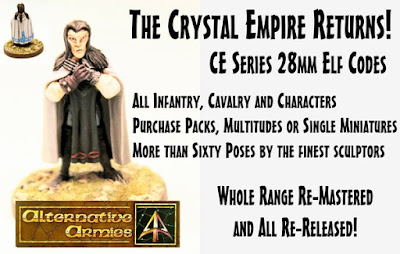 See all the CE codes on their new page of our website and select your choices from within them.  Go HERE or read on for more! 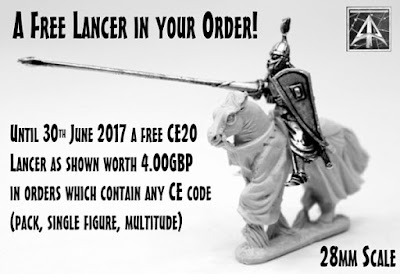 To celebrate the mighty task undertaken to get the Crystal Elf Empire back into the world we have a fantastic offer open to wargamers.  Until 30th of June 2017 we will automatically put a free CE20 Crystal Elf Knight with Lance on a barded horse, worth 4.00GBP, into any and every order placed with us which contains a CE code.  Any CE code from a single miniature to a pack to more will get the free lancer included.  No limit upon the number of orders you can place to do this.  Go HERE.
The Crystal Elf Empire 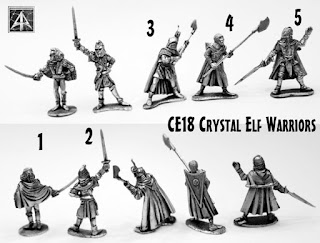 “Though outnumbered by almost every other lesser race on Valon the foot soldiers of the Crystal Empire are among the finest warriors to grace any battlefield.  In shining plate and swirling cloaks and sashes of verdant colour they are veterans of centuries of conflict.  Their smaller numbers are made up for by close ranks and cruel expressions on their noble faces.  As enemies push upon the Peacock Throne from all sides the Elves are ever more reliant upon magickes and fortifications as well as their bows, spears and swords to keep in their possession the lands of their ancestors.” 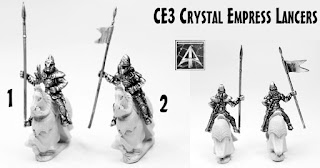 “Bedecked in finery of gold and rich purples the cavalry of the Crystal Empire is a sight to behold.  Though loath to dapple the trappings of their horses with the  mud or dust that come with campaigning the knights and lancers of the Peacock Throne will charge down without mercy upon the Undead and the despised Dracci to lethal effect.  Battle Magickes crack and boom over the heads of the riders and lessen the great odds against them.  Often led from the front by nobles and one of the Crown Princes of the Empire the cavalry of the Elves is a wondrous sight indeed.” 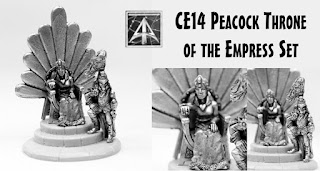 “The Empress Morgana has sat upon the Peacock Throne in Lyonesse for longer than the span of any mortal creatures thread of life.  Despite her great age she is a lady of beguiling beauty and fierce mind.  Heralded by tribunes as she rides the Empress wields the Power Ring, an artefact of tremendous magicke, able to rain down destruction or to re-weave the fabric of reality with just a thought.  This might is granted by degree to Elvish Sorcerers and Sorceresses for battle magicke in times of war or in court.  Armies of the Crystal Empire are led by nobles or by one of the two Crown Prince brothers the younger Mordred or the elder Marlass who are both formidable generals.”
Here is a list of the codes in the current CE Crystal Elf 28mm range.  They are grouped by type as they are on the website.  Each foot miniature is priced at 2.00GBP and most mounted at 4.00GBP with the choice of single miniature purchase or packs plus saving options for greater purchases plus two multitudes which offer 10% off and give you one of everything which is superb for skimishing or collecting.  We have pictures of all the miniatures both front and back and enlarged.  Go HERE. 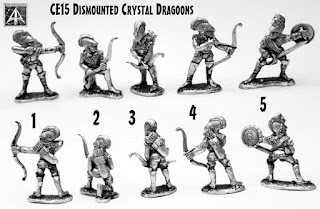 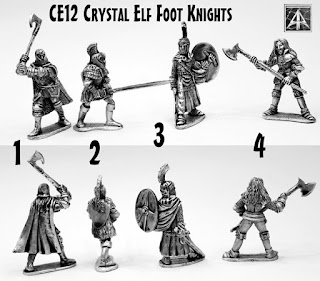 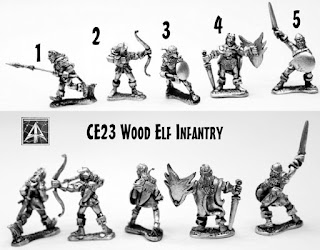 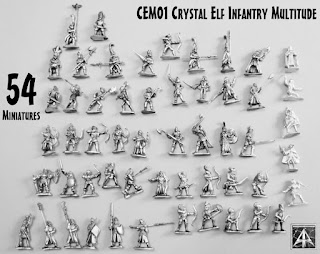 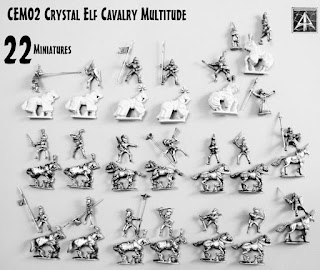 CEM02 Crystal Elf Cavalry Multitude Boxed Set – Save 10%  (18 Cavalry and 2 Infantry)
Go HERE.
We want to thank all of our customers for their support and their kind words during the process to get all of our classic 28mm range from the Dwarves to the Orcs Goblins and the Undead through the Humans, Monsters and more Knights back into the world culminating with the Elves here.  With the classic range now fully re-molded and re-released we are planning new expansions starting later this summer of further pack and single codes.
Thanks for Reading,
GBS