11. Juli 2017Hersteller ENComments: 0
The classic 28mm high fantasy range by industry legend sculptors is now almost entirely re-molded and re-released.  Today we bring to you a monster from the Various Nasty Things (VNT) series sculpted in 1991 by Steve Trickett.  The Coatl Winged Serpent is great for many systems and settings.  Go HERE or read on for more now that it is back in the world. 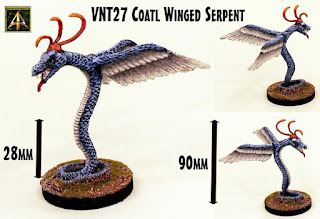 “In the mists of the mountains and above the steaming jungles of the mighty mystery spun continent soars the winged serpent.  Revered as a god by the tribes below the serpent, known as a Coatl, is a majestic monster which dominates its domain.  Its intellect is greater than that of a wise mage and it is rumoured to have magical abilities as well as eyes which can captivate its chosen prey.  Feathered wings and a scaled body with a bright plumage the Coatl is a serpentine menace to any stepped ziggurat dwelling folk who might be unlucky enough to be visited by their god.” 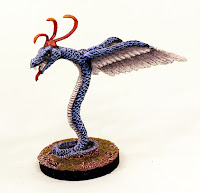 VNT27 Coatl Winged Serpent
This code contains one kit form 28mm scale white metal monster composed of four pieces which are easy to assemble.  This miniature is not supplied with a base and is supplied unpainted. Select your choice from the drop down product menu.  Choose from a pack or three packs with a 10% saving applied.  Assembly is required with some white metal miniatures. Go HERE. Poses in this code are as follows:
VNT27-01: The Coatl. One four part winged monster which is approx 90mm tall when assembled. 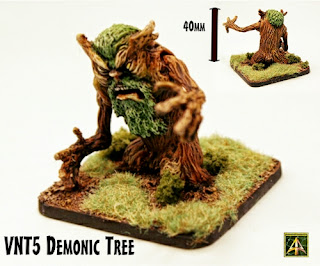 We have a huge range of excellent 28mm high fantasy miniatures.  Not to mention the Crystal Elves but also the Dwarves, the Orcs and Goblins the Adventurers and the Undead Legions as well as our other Monsters and Creatures such as the Tree Demon shown here.  Have a browse and remember to check out our Weekly Deals page where a 28mm fantasy code is discounted by 20% for a week. 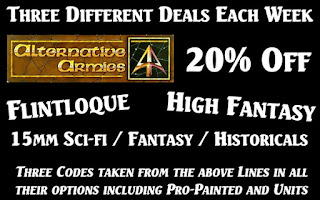 We will be continuing the releases with another classic range later this season and also with new packs which will see Alternative Armies adding to the fantasy ranges with new awesome 28mm monsters and miniatures.  But more on that later….
Thanks for reading,
GBS