26. Oktober 2017Blogs INTComments: 0
Made by Dark Alliance.
These things are big, not quite as big as  the  Balrog  in the LotR´s film, The Fellowship of the Ring and although Tolkien was never specific about the size and appearance of the Moria Balrog it´s film depiction is frankly,  ridicously enormous.

Thier height.
From page 194 in „The Book of Lost Tales II“
„Then Glorfindel’s left hand sought a dirk, and this he thrust up that it pierced the Balrog’s belly nigh his own face (for that demon was double his stature)…“

Apparently Elves are supposed to be tall, and Glorfindel around  6’6″ (or taller?) so doubling his height, this makes  the Balrog, at least  13′ tall.
The Alliance Fire demons are ca; 6cm´s tall in 1/72nd, roughly 4.5 meters tall in 1:1, roughly  15′ foot tall…so 2 and 1/2 times bigger than a man but roughly 2x the height of an elf so the sculptor at Alliance has them just about right. 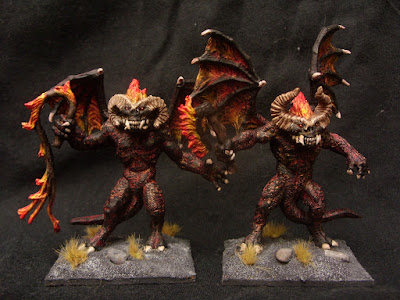 I´m not good at reproducing flame/fire effects especially on such large sculpts but I wanted to portray them as if they have fire /intense heat within them, hence the attempt at a  „Lava“ effect on thier Skin. Did it work?
They are also described as having „steel like claws“. Wether this means „actual steel“ or „as hard as steel“  I´m not sure. I tried steel coloured claws but it looked odd so I went for more animalistic colours. Fits with the teeth colour as well. 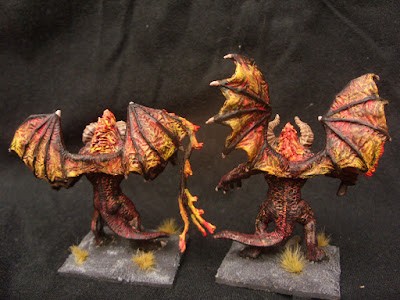 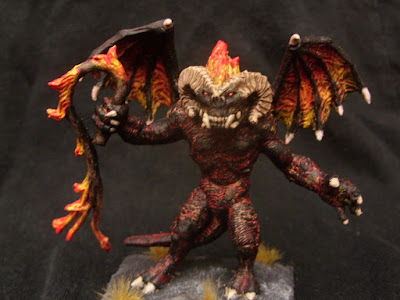 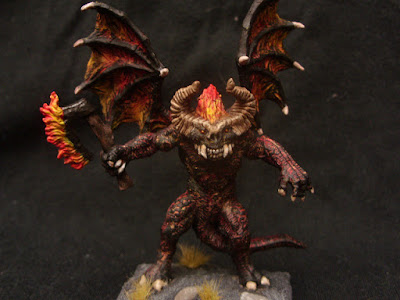 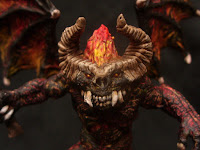 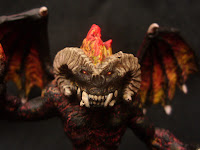 A tiny bit of Flash but as they are semi hard plastic it´s easy to remove.
The Demons have two holes in thier backs, the wings two pegs but the holes needed Drilling out so the pegs would fit. Even then, the wings are quite heavy and due to the non-glueable type of plastic they  needed pinning so they would hold.