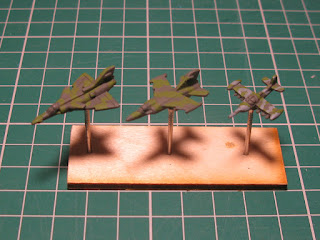 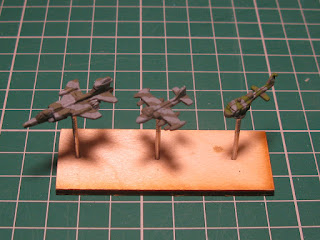 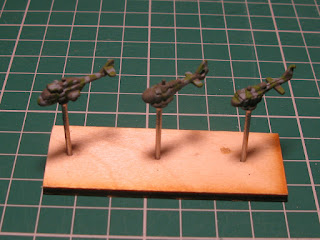 I’ve just spent a very happy hour or so painting the camouflage base layers on the Ecuadorian aircraft for the Alto Cenepa Wings at War project. I mixed the light green camouflage for the Mirage F1’s, Kfirs, A37’s and helicopters using a combination of Vallejo Olive Green and Camo Olive Green, applied directly over the sprayed on Halfords Camouflage Green undercoat. I went a bit freestyle on the choppers because I liked the grey / green / light green camo combination on the Super Tweets, so thought I’d do the same.

I painted the camo stripes on  the Jaguars and Strikemasters using Army Painter Uniform Grey, but fluffed up the camo pattern on the Jaguars, so overpainted the green areas with Vallejo US Dark Green. The C-130 Hercules ended up going completey pear shaped, however, so it’s gone to the boneyard in the sky until I can get a replacement model. I will crack on with the under fuselage areas next then give them all an ink wash before tackling the canopies.