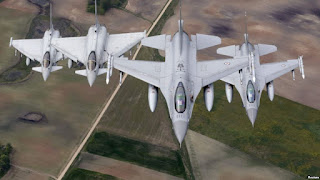 The Oddzial Ozmy packs of 1/600th modern aircraft, that I ordered for my Target Locked On! Flashpoint:Baltic project last week, arrived yesterday. I also found the box of planes that I lost down the back of the workbench, so I now have more than enough aircraft to equip several NATO flights and a decent range of Russian aircraft too, instead of the measly half dozen Su-27 Flankers that I based up to start with. I’m thinking of re-basing these with magnets but in the meantime… 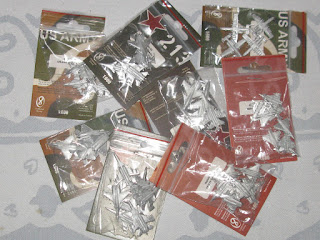 …there’s a very good deal on at Fighting 15’s at the moment, with all the O8 packs reduced to £2.50 and many of them with more models per pack than usual. For example, the pack of Eurofighters and Su-30 Flanker C models had eight instead of the now regulation four or six models. I’m going to add a few more aircraft before the stock runs out including some more ground attack aircraft (A-10s!) and some helicopters, not to mention a pack of Reaper drones. Bargain!