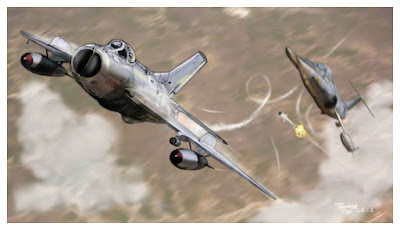 I was having a chat with one of the players at the club who is interested in 1/600th scale modern air gaming, so I mentioned the Target Locked On! rules by Rory Crabb when asked what I was using. I then realised that I haven’t actually play tested them yet, despite setting out on my Flashpoint:Baltic and Flashpoint:Taiwan TLO! projects nearly a year ago.

Now that I have some painted 1/600th PLAAF and  ROCAF fighters it’s about time I gave the rules a proper test drive, so this weekend I’ll be heading for the Straits of Taiwan c1967 to see what happens when two F-104 Starfighters clash with two MiG-19’s. If I get the time, I’ll also dig out the Oddzial Ozmy 1/600th scale modern fighters for the Flashpoint: Baltic project, if I can find where I stashed them?