Further Reinforcements in the Witchlands by Andy Jefcoate

25. August 2017Hersteller ENComments: 0
By Gads! The third in a series of linked Flintloque articles by Andy Jefcoate about his new forays in the Witchlands. If you missed the first and second articles where he got his starter set and then tried it out then you can read them on our blog HERE. In this article he takes to the frozen retreat and seeks out adventure. With pictures of his own painted collection. Read on and enjoy! GBS
Further Reinforcements in the Witchlands
(A Starter Scenario for Flintloque) 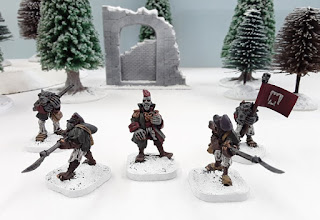 As mentioned in my last article I decided to buy the ‚Death In The Snow‘ game book and purchased it as part of the Shilling Service Pack (set 5026). This is great value and although I was happy to continue to play Flintloque Light in the short term I wanted to know more about the other units and races that form the Grande Armee Du Norde and the Dark Czar’s Forces. Although my bands had already received their first reinforcements in the form of 2 Dogmen for the Ferach force and 4 Cossacks on foot for their pursuers, I could now give these miniatures their own stats from the main game book!
Having looked at the force lists there are a fantastic number of troops to add to both sides and being someone who likes to plan ahead, I decided to make it easy for myself and just buy all of them! For now though the figures that you get in the Shilling Service pack gave me the additional reinforcements that I needed in the form of a small band of 6 Ferach Elf elite troops (Carabiniers) with their leader Colonel Gelure, and a section of 7 Little Werewolf Licantzrop Jagers plus their leader, the Vampyre Count Grimalov in the service of the Dark Czar. 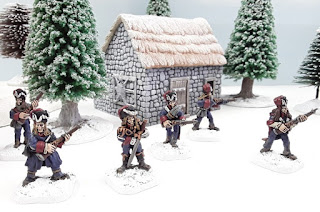 Straight away the next scenario came to mind. The Elf Carabiniers have been sent out to rescue Saindoux as it would be embarrassing to lose the General De Brigade (or are they more interested in recovering the Eagle Standard!). At the same time a section of Little Werewolves have joined the Savant Zombies as they are experts at tracking and bringing down their prey. The Vampyre has been sent to take over command of the pursuit due to the failures so far! 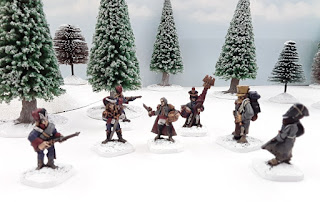 The game was played on a 6′ x 4′ table with a light dusting of snow which isn’t enough to affect movement. A track runs down the middle of the table from short edge to short edge, with trees, hills and some walls scattered about either side of the road. Saindoux’s party enter play on the track at one short edge at the start of turn 1. They are allowed to move normally in that turn. The Carabiniers enter play from anywhere along the opposite short edge at the start of turn 2 and can also move as normal. Then in turn 3 the Savant zombies of Captain Preserovitch enter play at the some point that Saindoux’s party entered play, and the Little Werewolves and Vampyre enter play mid way down one long table edge (whichever is furthest from Saindoux’s party, or as chosen by the Witchlands player if the distance is the same). These can all move as normal too. 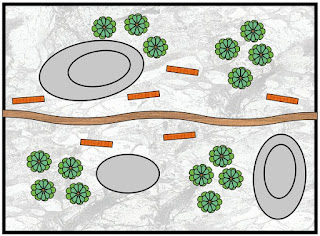 The game continues for 15 turns or until the objectives are reached. The objective of the Ferach player is for Saindoux and Ayers (carrying the eagle standard) to exit off of any point along the opposite short table edge to the one they entered. The objective of the Witchlands player is to stop them and take them out of play if possible. If both exit the table as stated the Ferach player wins, if neither do the Witchlands player wins, and if one does and one doesn’t it is a draw. All other casualties do not affect the result so expect the game to be bloody! 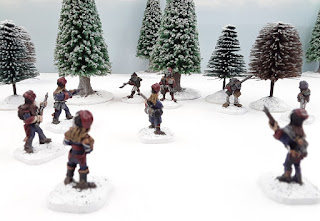 I played the scenario a couple of times and it was a close run thing both times. It is important for Saindoux and Ayers to keep moving! You could try the scenario with other forces but while I’m no expert I imagine that cavalry figures should be limited and also be on both sides if you want to use them due to their greater movement rate. You could also decrease the number of turns if you want to force the characters to move faster.
So in conclusion, my two forces have grown nicely to make them more resilient and give them more tactical options but they are still relatively small and composed of a very mixed bag of troops and races.  I began with 5024 Escape the Dark Czar. Although this fits the narrative it can make them more difficult to use as especially on the Ferach force, each figure has different stats in the game. I therefore decided that I needed to consolidate my current troops and look to form units. As more join both sides this is what would logically happen and makes them look more like an army. It’s time to place another order and I’ll let you know how I got on in my next article!
Thank you for reading.
Andy