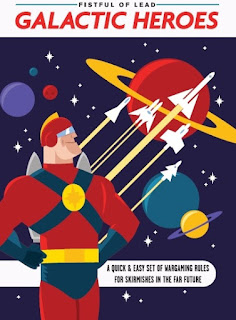 I had an email from Jaye Wiley yesterday evening with pdf’s of his new sci-fi rules, Galactic Heroes, and a pack of several scenarios, all based on the Fistful of Lead system. The rules run to a comprehensive 60 pages and, although the core is familiar there are numerous tweaks, additions and extras to fill out the sci-fi aspect of the game. I’m looking forward to trying them out but I am still undecided about which way to go with this, either 15mm or 28mm.
The former has the advantage of being both compact and cheap, as I have loads of figures already and like the idea of using the old Imperial Commander (Laserburn) range for this, while the latter is a bit more ’skirmishy‘ and detailed, assuming I can find a range of figures that I like and that isn’t all 40K spikey bits.  I also have a shedload of 15mm GZG figures that would be ideal for more hard sci-fi settings and the 28mm Strontium Dog figures can also be re-purposed as well.
I’ll just have to make up my mind!

« The Rifles Berkshire and Wiltshire MuseumRuin & Conquest: Adventures on the Isle of Ealand »
➤
Anzeige: