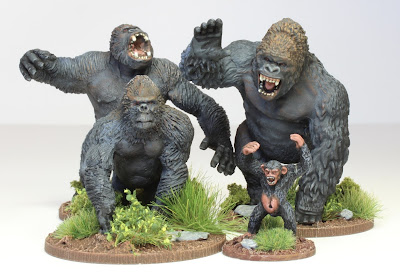 When a scenario is entitled ‚The King of the Apes‘, is stands to reason that you are going to need some Great Apes.  Now fortunately for me, I already had a few of these powerful primates kicking around the menagerie here at Awdry Towers and decided to get them all painted in order to make a more informed choice as to which one would star in the show. 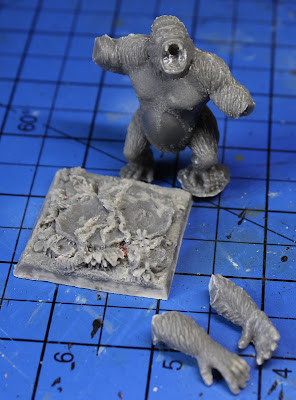 First up, and the most expensive, was a Jungle Gorilla sculpted by Beau Townshend and available through ‚Dark Arts Studios‘.    Now I rather liked this sculpt, but the resin casting was a bit of a pig to put together, requiring a considerable amount of cutting, filling and drilling.  Whilst I was cleaning it up I was worried I was going to lose some of the fine detail, particularly around the mouth, but with a little care I managed to keep most of his fine dental work intact.    The jungle base, which had been thrown in free of charge, was nice, but in the end I decided to match all three primates on the same 40mm MDF disc from ‚Warbases‘.* 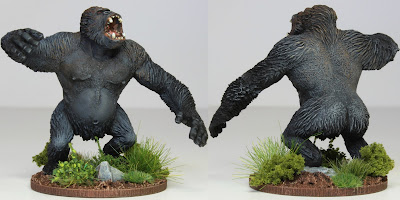 *Not the chimp of course, who is based on a 20mm metal washer.
Next up a proud Silver Back from the ever dependable ‚Wargames Foundry‘.  This was part of the adventure box that I picked up at ‚Salute 2017‘ and although a reassuringly heavy piece of metal, he seemed quite diminutive next to the first offering.  Mind you not as diminutive as Tarzan’s Cheeta from the Lord of the Jungle set by ‚North Star Miniatures‘.  Not sure how he managed to justify his promotion up the painting queue, but he is rather sweet and so I was happy to add him into the mix further demonstrating, if it was ever required, that ’28mm Victorian Warfare‘ is an equal opportunities endeavour, welcoming miniatures from all periods, genres and scales – just ask the Jawa in my ‚Imperial Assault‘ booster pack!

Finally, and the one that I decided to go with to represent my Kong, was ‚Crooked Dice’s‘ Giant Ape. This really is a superb piece of plastic.  Wonderfully characterful and fabulously cast in a lightweight and crisp plastic, this again was a multi-part kit.  The difference here is that it required very little preparation and went together like a dream. 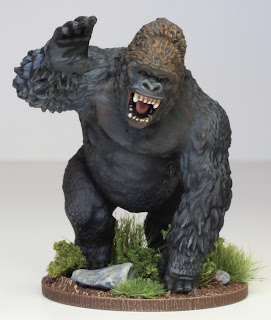 He really is a brute of an animal, but the pose rather cleverly disguises his true height and so you don’t feel that it is a ridiculously giant creature.  Other than the face there isn’t a huge amount of intrusive detail allowing a fair bit of freedom when it comes to painting. 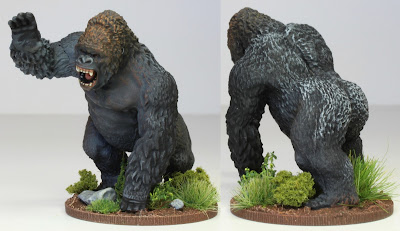 All three of my Great Apes, were given a black base coat, followed by a couple of passes with the trusty airbrush, initially with Vallejo Model Air’s Sombre Grey then Engine Grey.  With a few of the details then picked out, and some dry brushing for good measure, they proved to be a relatively quick and thoroughly enjoyable job at that. 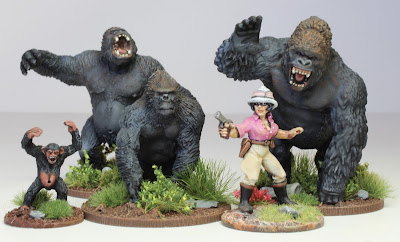