2. Oktober 2017Blogs INTComments: 0
The final figures leave the paint table before setting off on their first major outing with the full force.
Another batch of Freemen from Trent Miniatures, the separate heads do make for plenty of variants within the unit. The standard bearer and drummer is always useful within Sharp Practice to give your force a couple of options. 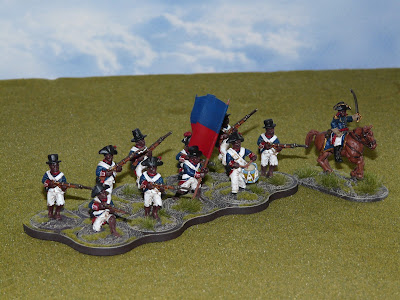 Ideally I would like to have purchased readymade flags but being one of those off the beaten track projects I could not find them commercially available anywhere so I had to improvise.
Given the mixed history of the war it not unsurpising that the flag varied as well.
As the revolution spread to the colonies so the revolutionary flag was adopted by the freemen of the island so any troops fighting against the monarchy would have been seen carrying the following.

In 1798 Toussaint L’Ouverture wrote the Haitian constitution adopted the French tricolour as his flag when he was nominally governor of the colony. After his kidnap and transportantion to France  Jean-Jacques Dessalines led the fight for independence against the returning French. In 1803  Dessalines tore up the French flag, threw away the white stripe as a symbol of the whites and had the remaining stripes sewn together by Catherine Flon, the goddaughter of Jean-Jacques Dessalines as the first Haitian flag.

The inscription „Liberté ou la Mort“ (Freedom or death) was added and this was used as a military flag for a number of the fighting units.

In 1804 the flag was modified: this time the blue and red bands were placed horizontally: this was the first flag of the independent republic of Haiti.

On 8 October 1804 Dessalines was proclaimed Emperor of Haiti under the name of Jacques I and the blue band was placed vertically again.
Jacques changed the flag to black on 20 May 1805; this can be interpreted as symbolising the people of the country or the colours could symbolise the motto „Freedom (red) or Death (black)“.

I have opted for the 1804 variant, which will allow me to eventually fight the later war with the Polish Legion, but I have my eye on a couple of Congo type figures which will make perfect standard bearers for the insurgent force so you are likely to see a couple of the 1803 types on the table in the weeks ahead.