3. November 2018Hersteller ENComments: 0
Welcome to part the second in a short series of Flintloque fiction concerning the campaigning of Lieutenant Harringtorc of the Albion Army.  If you missed part one please read it first on our blog HERE.  Written by Christian Cuello we and he hope that you enjoy this story and we look forward to more to come which will also be published for free on our blog.  The artwork in this article was drawn by Valonian artist Edward Jackson.  If you are looking for a miniature to match Harringtorc then we suggest an officer on foot from the 54506 Orc Command set.  Enjoy and I know that I did! GBS 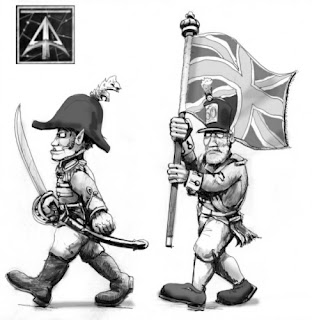 Parte the Second
A steady drizzle of rain pattered against the window.
Captain Gustave Coeur du Bouef squinted in the grey daylight that filtered into his office as he looked at the scrawled balance sheets that had been laid on his desk. His eyes carefully followed the lines on the impeccable handwriting, admiring every loop and curl as he became slowly drowsier. Of course, he understood none of it: numbers had never been his speciality and he was too old to learn now. That was best left to the legion of accountants, lawyers and bankers – in a word, bureaucrats – which appeared anywhere the army set foot.
The army may march on its stomach, but the road was padded with reams of paperwork.
There were conventions, agreements, taxes, fees, royalties… and ever since he had settled into Vigore it seemed to have gotten worse. Every day he was asked to approve or ratify administrative documents, and today was no exception.
One particular glorified clerk commissioned to him, Hugo, peered smugly over the edge of the ledger he had produced.
Gustave looked back blankly.
The clerk seemed to expect some kind of acknowledgment, but received none. This only seemed to make him more eager, and Gustave more irritable. He coughed politely to clear his throat as he prepared for his moment of glory with a deep breath.
“In one word, Hugo”. Gustave interjected.
“Spies.” He responded, deflated.
Gustave looked at the sheet.
He looked back at Gaston.
And back at the sheet.
“But… how?” he gestured at the sheet incredulously.
“Some nights ago. The port master was caught with some shillings on a surprise inspection.” Hugo fumbled and spilt the coins on Gustave’s desk as he simultaneously tried to get his presentation underway. “This wouldn’t be unusual under normal circumstances, but it is a discrepancy nonetheless. I had a word to the Watch and we were able to get an account from some witnesses which lead us to believe that… one moment, I’ve prepared slides.”
“Mon Dieu… put them away. I’ll take your word for it. The question is: what do we do about it?” he asked, mostly to himself.
Gustave levered himself out of the desk chair and turned to an open window, considering the city below as the mist gently cool his skin – a relief from the stuffy air of his room.
In reality, he was miles away.
He had been relegated to this office in a temporary arrangement during the early stages of the occupation of Vigore. This had been, at first, novel. Some reprieve from months on campaign. He knew he was no longer the strapping cavalryman of his younger days, and it seemed this was Commands polite way of saying so. Make no mistake, he was a soldier through and through, but the years had been, well… he looked down to where his waistcoat started to stretch across his belly.
“Spies, you say?”
“Oui, mon capitaine.”
He stroked his stubbly chin.
This could be the opportunity he was waiting for. But would he feed this up the line and wait for approval?
He skipped to a cupboard and swung the doors open.
“Hugo, get your things. Ready the horses. We’re leaving – you can tell me more on the way.”
“Do you mean the slides?” Gaston dropped the pieces of cardboard as a carbine flew at him. He caught it gingerly in a delicate, uncertain grip.
Gustave adjusted his scabbarded blade, strapped on a bandoleer and holstered his pistols across his chest. He shouldered an additional musket and satchel and made his way out the door, pulling his dusty greatcoat off its hanger and disturbing the thin layer of dust that had settled on it.
He was going to catch a spy.
*** 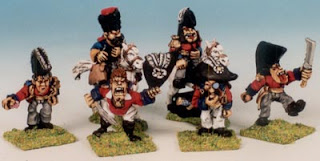 Steel clashed on steel, and the sound rang out through the ancient settlement. The duellers danced to the rhythm of a flurry of precise strikes, their skill with a blade quite remarkable to the untrained eye.
Harry knew he was starting to lag slightly, but could see no sign of his opponent feeling the same.
A small dishevelled crowd watched, cheered, and exchanged coins as the swordsmen exchanged blows.
“Come on, ‘Arry!” yelled Rotter, perhaps a little too enthusiastically for Harry’s liking. In the space of a heartbeat he flicked his eyes across to see his chaperone in the thick of the crowd. He’d have to have a word about his gambling later… if he managed to get out of this alive.
He instantly regretted taking his eyes off his opponent, as he frantically defended himself – did this elf never tire?
A badly calculated step backwards and he felt his heel slip on the wet ground.
He repelled a heavy blow, the clang reverberated through his bones. Somewhere between keeping his balance and fending for his life, he flicked his wrist and to his surprise grazed his assailant’s cheek.
It seemed to Harry that the crowd made a collective gasp as the roguish elf took a step back, startled.
“Papa!” screamed one of the crowd in a shrill cry.
Harry’s body seemed to react on its own to the sound of a loud thwang, his sword sweeping in a back-hand motion as he moved to intercept the bolt aimed squarely at his chest.
A spark.
A sting on his brow.
The world faded to darkness.