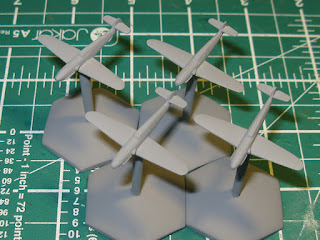 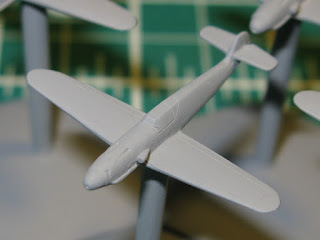 A slight change of focus* for the Bag the Hun III/JG2 project today, following some further reading round the subject. I’ve decided to add four Bf-109F4’s to the mix, using some Museum Miniatures Trop models with the air filters cut down to size. I also had to do quite a lot of filling and sanding to smooth out the pitting on the wings and fuselage, the castings being from moulds that have seen better days.
I got a bit stuck for flight stands at this point, then remembered that I had some pre-assembled ones stuck onto some Cant Z1007 bombers that I no longer needed, so I removed them minus the metal lug that fits into a hole underneath the centre line of the fuselage. This in turn meant that I had to drill and pin the top of each stand with brass rod before I could use them on the Bf-109’s. Phew! Anyway, I now have a schwarm assembled and undercoated in Halfords primer.
Why? Well, it appears that III/JG2 operated both the FW190A4 and Bf-109F at the same time for a while in early 1942, so I thought it would be a good idea for scenarios to have both types available. It also means I can push some scenarios back into 1941, before the FW190’s were operational, which opens up lots of possibilities. I also had the models hanging about, so why not? They will certainly make things a bit more interesting for the RAF!
(* hence the change of post titles)