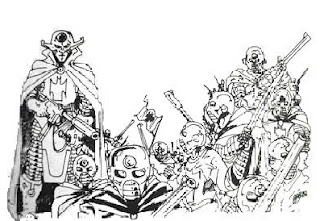 I’ve been busy doing the Xmas shopping today so haven’t done anything very productive at the garage workbench, which is freezing anyway so less than an attractive option in the first place. Instead, I had a tinker around with a couple of old army lists that I wrote for Imperial Commander way back when I ran the Laserburn Yahoo Group. This is still around as far as I’m aware but I’m not involved anymore, having passed the job on after I lost interest in the project. 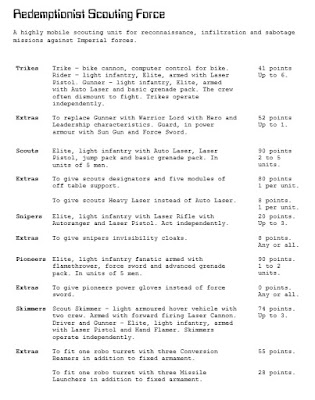 I had to dig around to find them but eventually unearthed one for a Redemptionist Scouting Force, complete with trikes, scouts, snipers, pioneers and skimmers. The 15mm TTG figures for this are some of my favourites, so I tried to include as many of the range as I could. I thought I’d tart it up with the original font, Data 70, for the headings and post it here, just in case anyone was interested. I also located a pdf download of the rules but I won’t link to that just now, as they are still copyright and are sold by Alternative Armies, although I’m sure if you do your own search you could find them too.