Incursion along the coast, South of Tanga 1905

16. Januar 2020Blogs INTComments: 0
Another outing for Mud & Blood and a trip to SWF’s gaming studio.
This time a trip to East Africa.
Taxed heavily and reduced to agricultural servitude, South-eastern tribes led by the Kibata rebelled in July 1905. A witch doctor had preached that a magic potion, Maji-Maji, could stop German bullets and several other tribes quickly joined the rising.
With only 588 Schutztruppe Askaris and 458 police in the south the Germans were unable to contain the outbreak. Missions and trading posts were destroyed. Mahenge and Songea were besieged and soon about 20 percent of the colony was in rebel hands.
With the main German force fighting in the south of the colony the British in Mombasa look for any opportunity to enter German East Africa and take advantage of the huge oil fields believed to be sitting on the land along the Pangaru River south of Tanga.
A team surveying the area two years before believe they discovered all the right signs for there to be oil. Britain must have that oil but is reluctant to have hostilities with Germany unless it can establish it is there. The border has always been in dispute and now the timing of the Maji-Maji rebellion couldn’t be more perfect.
I have been given the command of a party to cross into German East Africa and discreetly look for oil. At the same time, I am to incite the local tribes to rebel against their German oppressors.
Setting off from Mombasa in the “El Zafir” a large sternwheel gunboat and travelled along the coast entering up into the Pangaru River.
I set up base camp near a local village and have started to erect a drilling rig to establish if there is indeed a reason to go to war with Germany. The “El Zafir” has left to resupply back in Mombasa. They are due back today.
Drilling is going well when smoke is seen on the bend in the river. 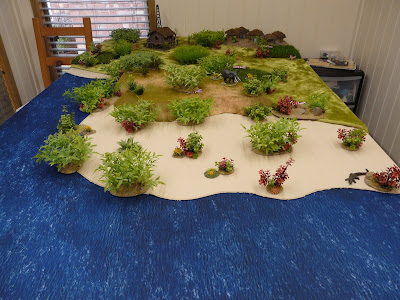 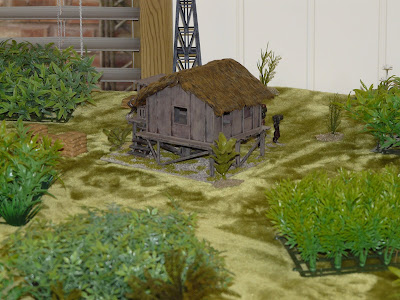 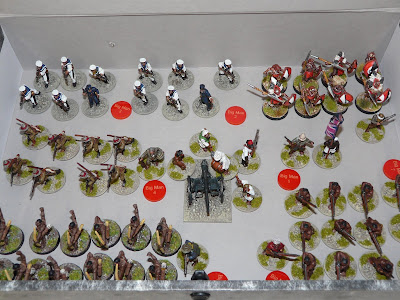 The defenders all hidden behind blinds. 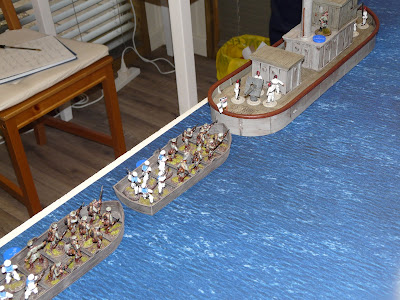 Not quite what I was expecting that’s not the “El Zafir” but a German Steamer with infantry and sailors in row boats behind. I issue rushed orders for the defence of the river bank and base camp. 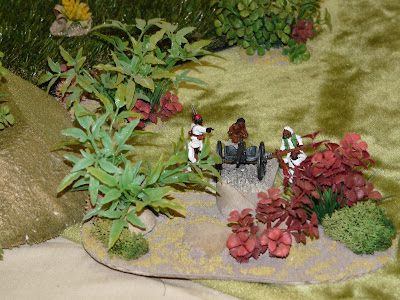 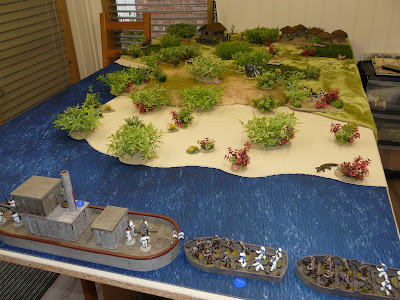 As the gunboat comes into view I fire a salvo from the native gun looking to slow the German advance. That’s a lot of Germans when I considered the make up of my own scratch force. 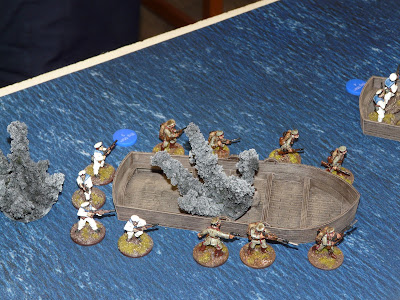 A lucky strike and a shell lands in the middle of the row boat as it strikes for shore. That should slow the German advance. 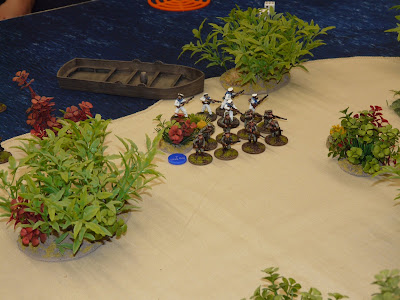 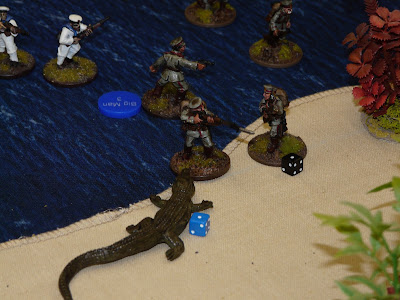 Things were not going well for the Germans even the wildlife was on the side of the King, as the soldiers and sailors swam for the shore men were dragged below the waters of the river taken by crocs and the weight of their own kit. Eventually the troops reach dry land. 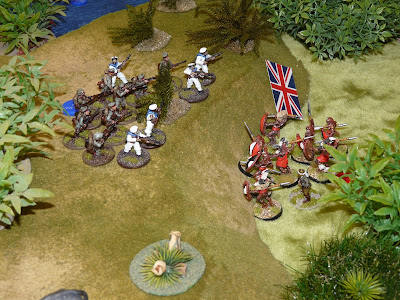 Having regrouped and with no sign of the any British defenders the Germans cross the beach and crested the main rise catching a unit of Masai Warriors who had been scouting the river bank. A short firefight and the landing party drive off the natives. 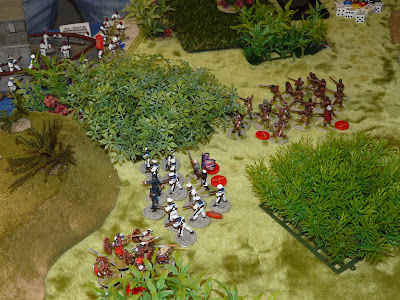 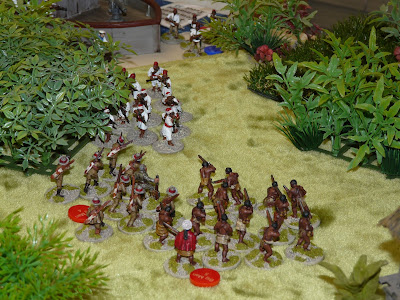 The Landing party had stirred up a real hornets nest…  fire erupted from the undergrowth as sailors, natives forces and colonial troops looked to halt the incursion. The Germans on the hill fell back and the troops leaving the gunboat were stopped in their tracks. 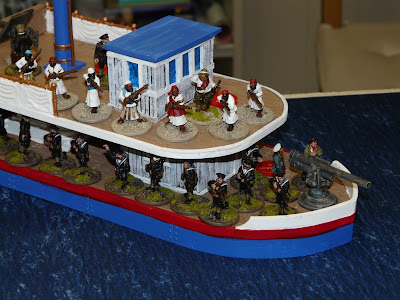 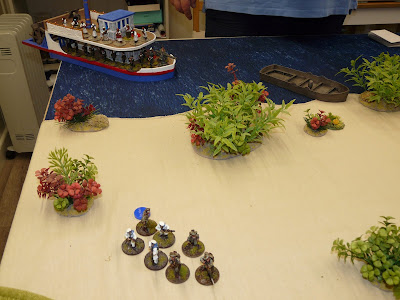 1pm and finally “El Zafir” turns up. The unlucky sailors who had been blasted, bitten and drowned were no shot on the open beach. It really was not there day. 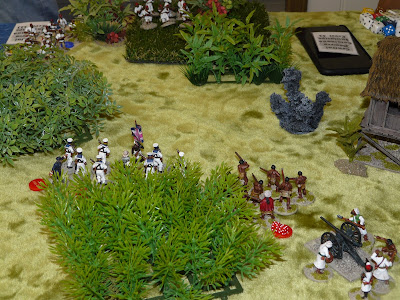 Meanwhile the battle for the inlet continues, more Germans and their Askari troops are ashore but the defenders are bolstered by the Royal Navy who poor fire into the German police looking to flank the native forces. The cannon is back having been rushed back from it’s vantage point on the beach. 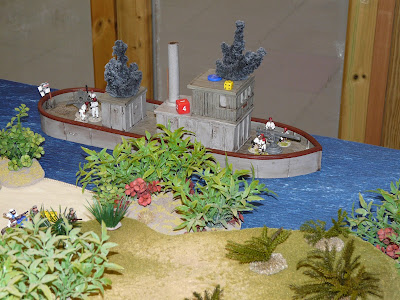 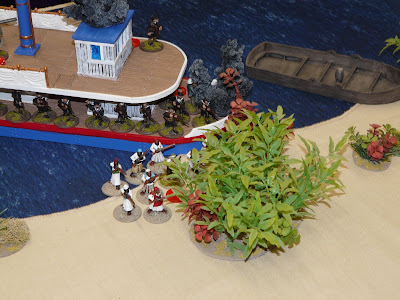 The gun boats enter into a vicious exchange of fire, the German gunboat is crippled with multiple hits to the engine room and wheel house, fires spring up in multiple locations, the British paddle steamer is no better. With the loss of it’s helmsman the steamer crashes into the river bank. A German shell lands squarely on the main gun taking it out to the delight of the under pressure Germans. The British landing party head for dry land. 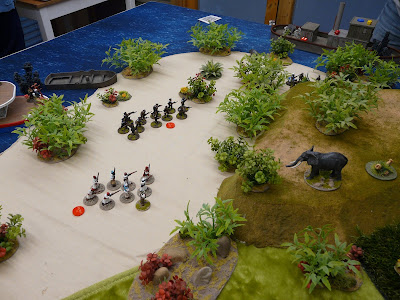 The shows over…
The Germans were pinned on the beach by the British defenders and more were sweeping across the beach. The German gunboat’s rear run was still causing the brits some trouble as it continued to blast holes in the beached steamer, but they would not be reaching the drilling platform today…
A great days gaming…. and nice to get some new toys on the table.